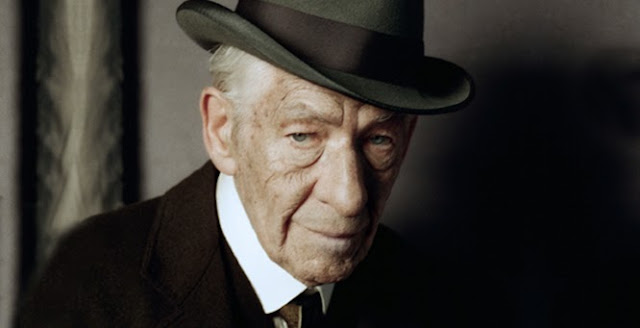 Considering there are currently six separate studios eager to bring their own riveting and sure-to-be-life-changing versions of Robin Hood, it only seems appropriate we start flooding the marketplace with Sherlock Holmes features. It isn't like poor Holmes has been left in the cold though, there currently is only the Guy Ritchie directed and Robert Downey Jr. starring steampunk action Sherlock Holmes franchise in the movie realm, but for TV we have Sherlock, the Benedict Cumberbatch starrer with Holmes solving crime in modern London and then also Elementary with Holmes solving crime in modern New York. In order to meet the entertainment criteria of a famous literary adaptation needing at least four different versions, we now have Ian McKellan playing the iconic detective set in the much less modern and very un-steampunkish 1947.

Mr. Holmes is an adaptation of Mitch Cullin's 2005 novel, A Slight Trick of the Mind. The first thing I noticed is that it isn't "similar to Pirates of the Caribbean" or "set in a Fast & Furious like world" or seeming to build to a Avengers-like event movie, which means it already is a thousand times better than everything being pitched in all the threatened Robin Hood movies. It is a well-known property that has actually proven to be popular in the last few years (unlike you know. . . Robin Hood) that is completely eschewing the blockbuster formula. This is a delightfully smaller budget, limited release character-driven drama that seems to be made because there was a good story to tell rather than the potential to show it in 3-D and have a theme park ride to commemorate it next year.

I'm a sucker for "breaking the myth" type movies where the narrative reveals an iconic character who wasn't what had been recorded and documented. It seems that pesky Watson embellished several details about the world's most famous detective and now Holmes wants to try to write his own memoirs to correct it. Holmes now lives on a remote farmhouse with his housekeeper and her son Roger who is clearly a fan of his literary version. The trailer reveals McKellan in several warm scenes with Milo Parker who plays Roger and also has some biting wit to prevent it from becoming too gooey.

This is the first American trailer and it does promise a lot more suspense and "action" than the UK trailer, which just seems to be a sign marketing trying to appeal to what they think each country wants to see. Every trailer has promised a charming period drama that takes its time to develop the character of Holmes who is coming to terms with his legend and past.  McKellan is perfectly cast as he brings both a poise and strength but also a sense of magic and whismy. The trailer feels literary and a sense of blending reality with fantasy.

Director Bill Condon and crew take the time to really craft the time period and make it feel authentic rather than just tossing in some pop culture references. The settings are absolutely gorgeous and the trailer is rich in atmosphere. It feels like a movie I want to settle down with for several hours and soak everything up.

The trailer seems to be selling it as Holmes last big case, but the theme of him fearing he is disconnecting from his past hints it may be something different. Is the case just a way to humour Roger or allow Holmes a way to entertain himself for a few hours? Is it really an unsolvable case that the master detective can prove he still has the intellect and power to crack? Is it a delusional and broken down Holmes who is tampering in innocent people's affairs? Or is the trailer completely deceptive and everything shown is just flashbacks and stories that he is telling Roger? None of that really matters since the movie is going to be about the characters and working through themes of legacy and moving on.

This looks absolutely wonderful. There aren't any crashing cars or robotic spiders. It is story over sizzle. It has a chance to be just as thrilling and riveting as any of the big tentpoles this summer. Hopefully, it finds an audience and can gain some expansion to make it to more cinemas this summer.
Ian McKellan Movies Mr. Holmes Review Trailers