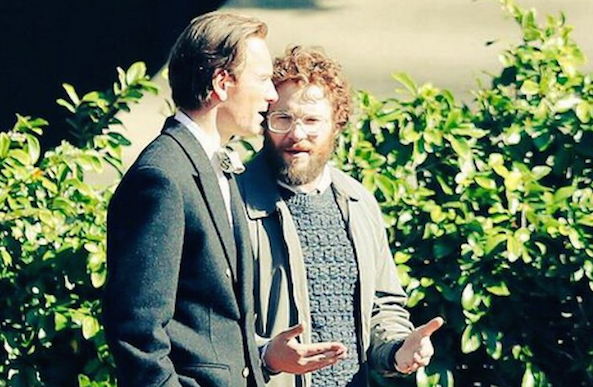 It feels like it has been years since the Aaron Sorkin written script to the Steve Jobs biopic first started being discussed, and maybe the wait seems that long due to getting the Ashton Kutcher starring Jobs tossed in (I remember some confusion over that picture being the Sorkin scripted one). Luckily for this Danny Boyle directed feature that the Kutcher one played to empty cinemas and poor reviews so the momentum and anticipation for this hasn't been derailed.

How much anticipation is there really for this? The Fifth Estate proved that pictures about major figures in social media and technology don't always cause the crowds to come flocking. Though that also was an awful movie and this one is being scripted by the same guy who wrote the last brilliant movie about a social media icon in The Social Network.

Steve Jobs is an influential and groundbreaking innovator who was also a very polarizing and at times eccentric figure. His life is one that could be very fascinating for the biopic treatment. Also this movie isn't planning to be a straight-forward story about Jobs' life but rather just contain three scenes that are set during three major product launches. So it is a pretty ambitious and intriguing idea. Boyle is up to the challenge with a portfolio of acclaimed movies he's helmed like Trainspotting, Slumdog Millionaire, and 127 Hours. He has experience making rather intimate stories feel grand, and he likely has a script with punchy and whip-smart dialogue.

I also love the cast here as Michael Fassbender looks pretty spot-on as Jobs and Seth Rogen looks like a solid casting choice in Steve Wozniak. Maybe this will be Rogen's chance to follow Jonah Hill's in moving from comedy and landing a coveted Oscar nomination. They're supported by immense talents like Kate Winslet and Jeff Daniels. So, this at least sounds like a pretty strong contender for a Best Picture nomination and a prestige picture worth getting excited about.

I can't really say much about the actual trailer as this is pure definition of a teaser. It just provides some dialogue and a few snap shots of the cast. It has effectively whetted my appetite and it is right alongside Suffragette, The Revenant, and Snowden as end of the year heavy hitters that should be worth watching.
Aaron Sorkin Danny Boyle Michael Fassbender Review Seth Rogen Steve Jobs Trailers