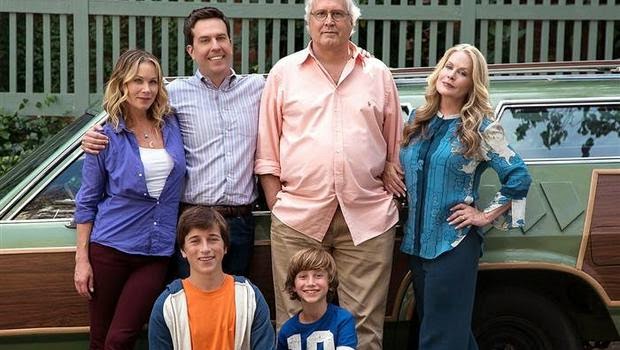 I started doubting Vacation was a real thing but rather just a feverish dream that was haunting Ed Helms. Since almost every summer movie has dropped at least one trailer, I was waiting for the "been pushed into release date abyss" announcement. Instead, we've got a red band trailer to show that Vacation is oh-so-much a very real thing.

It is absolutely a waste of time to complain about anything being remade at this point, because every movie ever will have its own reboot by 2022 (as I sure was predicted in some Ray Bradbury short story). Vacation was a bit of a surprising choice since I thought its destiny was to eternally churn out a VOD release every few years so Chevy Chase can remain happy he isn't slumming it on Community anymore but rather doing top-notch Oscar fare. We never even got the sure to be Best Picture Moon Vacation, which seems like a major missed opportunity.

No fears, because Chase gets work here even though it will likely be a one scene cameo based on the trailer. Nobody should be too disappointed since Vacation looks to be intent on reworking every single memorable Chevy Chase scene from the original (so we can play them alongside each other and take notes). I trust Helms to totally be able to pull the scenes off and even make some of the regurgitated material seem fresh and funny, but it can be tedious to sit through 90 minutes of self-aware winking that makes it clear they know this is a remake and it didn't need to be made.

I actually did like the joke where Helms mentions that nobody remembers the first vacation but this one will still be totally different. For the most part, the trailer was amusing and I really like the casting. Chris Hemsworth was great as the well-endowed boyfriend and I'm always happy to see Leslie Mann.

But it isn't bust a gut funny, which could mean saving stuff for the next 80 trailers to get unrolled. I'm still not convinced this trip is worth taking.
Chevy Chase Ed Helms Leslie Mann Movies Review Trailers Vacation