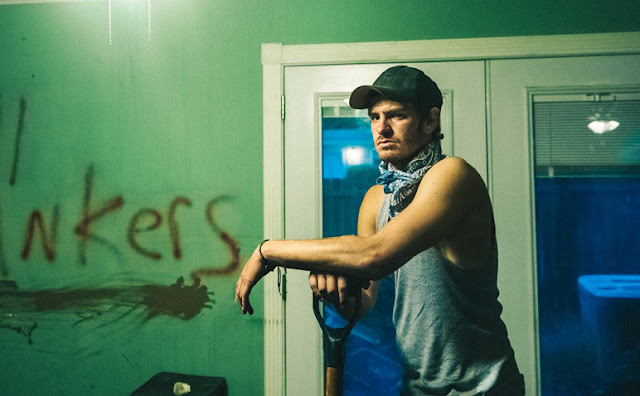 As the movie sites are busy speculating this week who will end up being christened the new Spider-Man, Andrew Garfield is out to prove there is indeed a fulfilling life post web-slinger. He is starring in a timely and dramatic thriller called 99 Homes and it looks set to make us quickly forget he got ousted from a big blockbuster series and also remind us he is an actor worth watching.

This feels like a modernized Wall Street in that the narrative is exploring a real contemporary problem that is widening the gap between the financially prosperous and the struggling working class. Like the 1980s Oliver Stone film, it will try to balance message with thrills and drama.  From the trailer it looks to be a well-paced thriller that can hopefully overpower the potential preachier moments. There also looks to be a focus on the emotional turmoil of the main characters, which will be it easier to connect.

Also like Wall Street, we have a villain in a central role spouting his toxic values and attempting to corrupt an impressionable and naive young man. If you want someone sleazy and heartless then Michael Shannon is there to rock it. Has he ever played a hero or anyone sympathetic? The guy is always an oozing slimeball that can make drinking a coffee look cruel and inhumane. The little clips of him showcased here hints at another charismatic and powerhouse performance.

Garfield looks to be primed to go toe to toe and looks stellar in the trailer. Garfield is baby faced and charming, which is necessary for us to stick with him and keep him sympathetic while he does questionable acts like working for the world's moat evil man and kicking people out of their homes. The narrative will likely be a battle for Garfield's soul as he tries to justify his actions for the sake of supporting his family.

Speaking of performances needing mention, Laura Dern is always underrated and looks to be showcasing her talents in a supporting role. Wild from last year helped put her back on people's radars and this look ready to cement her again as a prime talent. She may turn out to be the most sympathetic character in this picture (has she ever been unlikable in a movie?).

This has played at some festivals already (including TIFF) where the reviews have been positive but not glowing. I'm guessing this will play out more as a tightly paced thriller than prestige picture. That is great if the acting get the chance to shine and the picture doesn't let message overwhelm the story and characters. This looks different and full of "straight from the news" relevance, so I'll be keeping an eye out for it. I really hope this can be a picture to elevate Garfield as one worthy of awards talk.
99 Homes Andrew Garfield Laura Dern Michael Shannon Movies Review Trailers