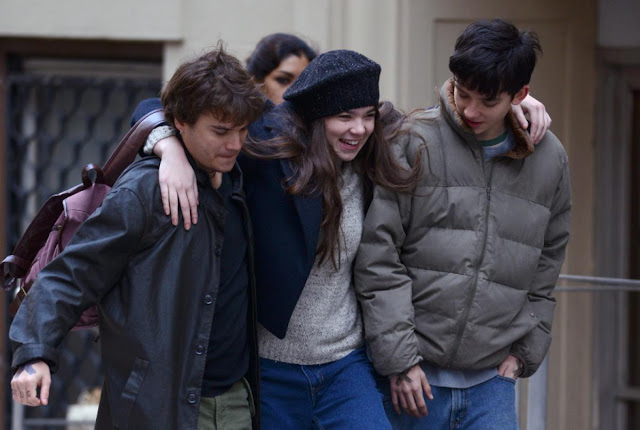 Asa Butterfield must now live in a world where he won't shoot webs from his wrist or fire off witticism while awash in snazzy blue and red. Butterfield was at one time rumoured to be the heavy favourite to play the next Spider-Man, but Tom Holland, the real next Spider-Man, proves why you don't put betting money on potential casting choices. Even though Butterfield won't be in one of the next big blockbuster pictures, he also gets to avoid being accused of killing a beloved franchise (so, win?). Also the new word is that the next Spider-Man will be a John Hughes-ish high school coming of age tale that just happens the bullies are super-villains. This means that Butterfield hasn't really missed out that badly since his next picture, Ten Thousand Saints, is a coming of age tale set in the streets of New York -- so, basically the new Spider-Man except with far less webs and swinging.

This isn't just a coming-of-age story in New York, but it is 1980s New York with its punk music, AIDS fear, and crazy hair. I like that there is a definite flavour of the decade throughout the trailer, but it isn't the blatant pop-culture dropping and nostalgia over-load that can hamper the authenticity in many period pieces. There is a more timeless feel that teenage angst and fears carry from every generation, such as pregnancy fears or doubt in parents. While New York seems to be a defining part of the feature, it is at its core looking to be a character driven story that focuses on a boy navigating through the city with his immature father and potential love interest.

It helps that the father is the great Ethan Hawke who is delivering his usual energy and charisma and feels to be channelling a bit of his father from Boyhood. Hailee Steinfeld is a great potential girlfriend and its looks like the movie is interested in making her character deep and nuanced rather than just the object of the lead's affection. Steinfeld is a fantastic actor that has been wonderful in everything she has done and hopefully this is another stand-out role. There is some pretty great supporting roles with Emily Mortimer and Emile Hirsch (who may be playing the hard-edge corner of a love triangle).

I'm a sucker for all the things that are promised in this trailer, and the only downside is that it is probably the type of movie that just gets played in New York and I'll have to wait 5 years for it to come to Netflix.
Asa Butterfield Ethan Hawke Hailee Steinfeld Movie Review Ten Thousand Saints Trailer