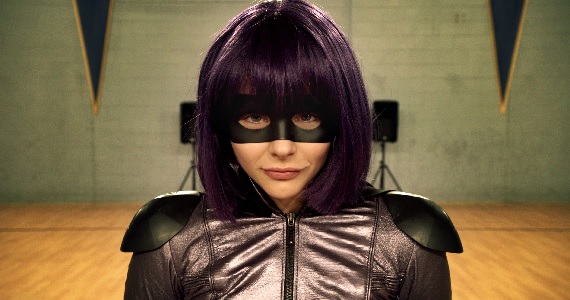 In a shocking M. Night Shyamalan-like twist, a filmmaker wants to make a prequel to fix a franchise and earn back fan's goodwill rather than to destroy it. Yahoo Movies reports that Matthew Vaughn wants to make a prequel to Kick-Ass that shows the origin story of the Hit-Girl. The movie will act as a bit of an apology for the sequel that turned out to be a big disappointment to critics and fans. The original Kick-Ass picture was a surprise hit that was a witty and genre-bending self-aware superhero action-comedy.

One of the best parts of the original picture was the over-the-top and quirky performance by Nicolas Cage who did a great interpretation of a 1950s sitcom father blended with 1970s action movie vigilant with a heaping mixture of 1960s Adam West's Batman. Although I don't think there is any need to delve into yet another origin story, especially since Hit-Girl is pretty well-established at this point and I always stand by the idea that if the prequel story was any good it would have been included in the original, But I'll happily take any excuse for Cage to reprise this role that is perfectly suited for the actor's grandiose embrace of camp. Chloe Grace Moretz was terrific and had a believable and wondrous chemistry with Cage, and a movie that focuses entirely on them is pretty appealing. You have to set the clock back in order to include Cage for obvious reasons for those who saw the picture (yes, yes, yes I know it's a spoiler).

I'd rather it be about one of their adventures and an original story rather than an attempt to "explain" who is Hit-Girl, I seem to remember that was already covered in the original picture, and plus you don' get the satisfying pay-off for her revenge narrative as that gets covered in the first Kick-Ass as well. But Hit-Girl and Big Daddy taking down different baddies and checking out guns over hot cocoa sounds like a fun time at the cinema.

But what I like about this news the most is a filmmaker actually admitting he disappointed his fanbase and harmed a franchise. There isn't any attempt to defend himself or claim that fans didn't get it. He accepted his defeat and is ready to make amends. He also realizes he has derailed plans for Kick-Ass 3 and doesn't have a clamouring audience without some evidence that things are back on track.

Of course, that isn't to say this prequel is a guaranteed hit either. But Vaughn seems to be well-aware of what made the first one so fun and is ready to give us more of that and give us one more delightful foray with Big Daddy. I just hope that doesn't spark attempts at Chappie and The Gunman prequels.

Though I suddenly realized something, prequels as the "make good" has already become a thing this year. The first Insidious was well-received but the sequels was a disappointment critically (though it still did well in the box office). Then this year Leigh Whannell got things back on track with a really good Insidious Chapter 3 that took place before the events in the original and gave us time with a beloved character they had killed off. Maybe I shouldn't be so hard on prequels after all.
Chloe Grace Moretz Hit-Girl Kick-Ass Matthew Vaughn Movies Musings News Nicolas Cage Prequels