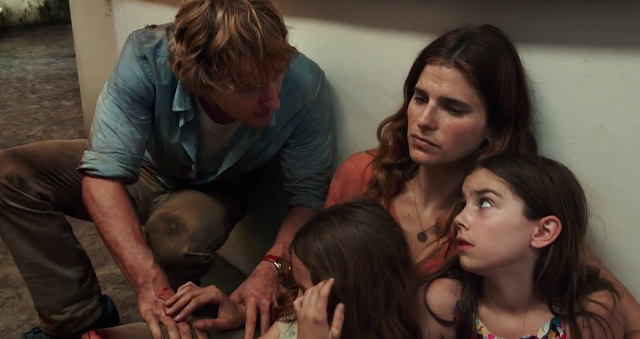 I'm not really sold on Owen Wilson as an action star, even if No Escape isn't his first foray into the genre (Behind Enemy Lines, Armageddon), but that is why Pierce Brosnan is around to mentor him on how to hold a gun and kick ass like a middle-aged wrecking ball. I'm a little torn over the Lake Bell casting as I love that she is in a bigger budget wide-release picture that will earn her more eyeballs but she looks to be stuck in the "wife who needs to either be rescued or patiently wait with her kids as her husband saves the day" role. Though considering Bell's disdain for such roles, I have hope the trailer is just misleading.

The trailer is largely showing the same clips and scenes offered in the previous trailer. Including what is one of the more stomach pounding scenes for a father to witness in Wilson tossing his daughter from the top of one building to another where his wife must catch her (and he must have a hell of a throw). My sense isn't there won't be anything as nail biting and arm-rest squeezing as that moment, which makes me wonder why it wouldn't be saved for the paying customers. Director John Erick Dowdle frames it well and makes it a nerve zapping moment, which at least gives him one thing I can credit him for as his past portfolio doesn't light my world fire with stuff like Quarantine (I haven't seen either Devil or As Above, So Below but neither rocked it critically).

The original trailer focused more on the uprising and Wilson's family being stuck in the middle of the violent rioting and escalating confrontations. The promise was for violence and chaos and maybe a little political messaging. This time around the trailer is going the more personal route. With a scenes of Wilson reflecting on the chaos and shots of his family to show the stakes of his situation. Hopefully, Dowdle realizes that a genre picture like this would be out of its depth to try to explore the uprisings that have sprung throughout the world in the last several years but rather make it more about the family's own personal struggle and need to survive.

In that way it will be a disaster picture but rather earthquakes and tsunamis, it is gunfire and rebels. But at least this time, the hero will get to punch something. If disaster flick is what this will be best labelled, I'll have to say I happily got my fill with San Andreas already.
Lake Bell Movie No Escape Owen Wilson Pierce Brosnan Review Trailer