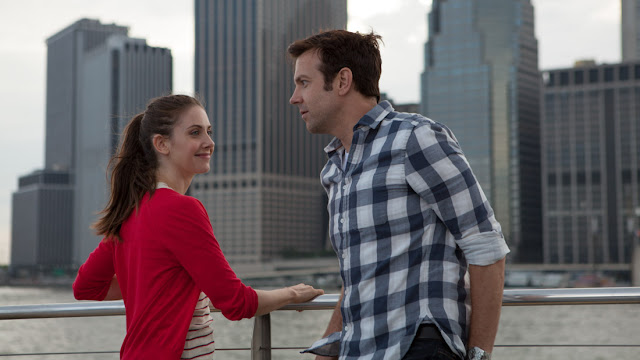 I never saw the Leslye Headland directed Bachlorette, but it occasionally goads me on Netflix but I've been able to dismiss it as a Bridesmaids knock-off. Though it has an appealing cast with talented and funny people like Rebel Wilson, Kirsten Dunst, Isla Fisher and Lizzy Caplan, which makes me think maybe one day I should allow it to lure me in. I also was delightfully surprised by the humour and smarts in the 2013 remade About Last Night that was written by Headland. Her second directorial effort is Sleeping with Other People, which feels like a far more cynical and edgier When Harry Met Sally. So, maybe Headland's thing is taking popular movies from the past and throwing in a modernized spin (because you know, Bridesmaid is so ancient and needing to be refurbished).

Jason Sudeikis and Alison Brie get me excited about any project they're in because their energy is so contagious and warm (so, essentially I am saying they give people fevers, so don't share straws with them). In the trailer, they have a sizzling chemistry and both are naturally likable, which is pretty crucial here since their characters are assholes. It is a rather steep uphill wanting me to wish happiness for two players and cheaters, but to be fair, the history of romantic comedies tend to start us off with pretty disposable and retching characters, and at least this time around the picture seems aware that they need to be redeemed.

It look to be a hard-edged raunchy comedy type with ample amounts of sweetness that pulls it off in clips like Brie stoned out of her mind while teaching kids how to dance. The supporting cast is pretty great with Adam Scott always endearing in whatever he does. There is nothing here that makes me think this won't be predictable, but it also look like it could be surprisingly fun and engaging. So, essentially this year's About Last Night, so that pesky Headland is convincing me more and more to try out Bachlorette.
.
Alison Brie Jason Sudeikis Lesleye Headland Movies Review Romantic Comedy Sleeping with Other People Trailers