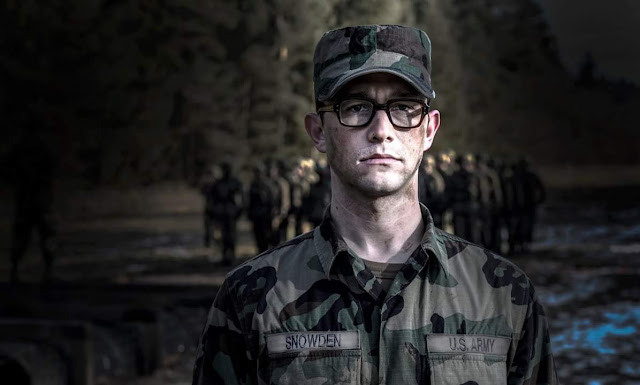 This morning on the "Best of the Mid-Year" podcast I listed Snowden as one of my most anticipated movies for the second half of the year, despite not seeing any trailers or photos. The interest was largely due to it being the latest Oliver Stone picture, and even though his output has been inconsistent quality-wise the last two decades, he is still one of the most audacious and irreverent directors around. Plus the story of Edward Snowden leaking classified NSA documents to the press so the public can know about the government's privacy breaches is not only one of the major news stories of the last ten years but is also the kind of challenging and conflicting material that is perfectly suited for the very left-winged and political Oliver Stone. The director of JFK will assuredly intertwine some fiction and exaggeration to put forth his message and story, but the scope will likely be immense and the brains will be kicked into gear while viewing it.

To be honest, even after this teaser I can say my anticipation comes from knowing very little. The only real revelation for me was that I was unaware that Nicolas Cage was in this picture, which actually makes me all the more excited (though I assume he won't be punching women dressed in animal outfits or screaming about bees). The cast is pretty impressive and hopefully, Stone call pull out the kind of performances that put stars like Joseph Gordon-Levitt, Shailene Woodley, and Melissa Leo in Oscar talks. It will be a busy fall for Gordon-Levitt, though but The Walk will turn out to be the more mainstream friendly picture (thus maybe the one more likely to give him an Oscar shot).

The teaser does feel like an on-his-game Stone even if all we see is the American flag with an ominous version of a Sunday school song playing in the background. It is a rather eerie rendition of "This Little Light of Mine." The long shot of the American flag makes one feel uneasy and uncomfortable. Stone is a proud American but one who isn't afraid to shake his country up and challenge it. Though Snowden will likely be a complicated and nuanced character, I'd be shocked if Stone doesn't side with him and make him the hero in this narrative.

This is the kind of material Stone seems passionate about. If he can avoid getting preachy, overt with the message or even didactic, this should be a complex and thought-provoking thriller that is incredibly relevant and controversial.
Joseph Gordon-Levitt Movie Oliver Stone Review Snowden Trailer