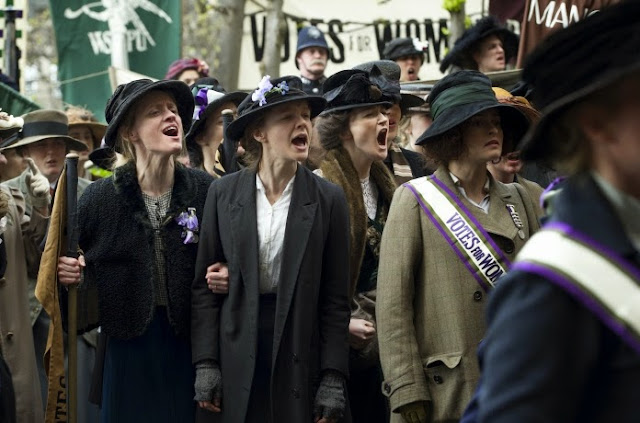 If Suffragette even turns out half-decent then it has to be considered a strong Oscar contender. It has many elements that the Academy laps up like being a period piece, based on historical events, has lush visuals, and strong chance to be a commercial success. This will likely be a big draw to the 30 and above female crowd, which have proven to be one of the stronger movie going demographics. Plus after all the rage over the last Academy Awards being a celebration of males, this is a picture that is about women, stars women, written by a woman (Abi Morgan), and directed by woman (Sarah Gavron). Luckily for Suffragette, the first trailer hints at a pretty great looking movie to back it all up.

The visual and set-pieces in this picture look gorgeous, which provide a great contrast to the violence and chaos. The images are shrouded in greys and rusty yellow tinges that throw you in a somber mood. I love that amongst the volatile acts, carnage, and fevered emotions there was a soft and delicate song playing that delivers a quiet subversiveness to the proceedings like a march down town square. Maybe this is to be blamed on being a father to a baby daughter, but I felt the emotions get stirred and the events left me a little rocked (I fought the tears away though).

This is the side of the women suffrage movement that has often been ignored. The picture brings a lot of relevance and discussion to modern issues. The militant underground women were pushed to the brink, with the Carey Mulligan's character declaring violence and war was the only way to reach the stubborn male authority. The nest needed to be rattled to get some attention.

The movie feels contemporary due to a lot of the chaos and riots that have unraveled over the past few years that have been a sign of how the lack of change has been crushing entire groups of people. It also is a fitting push and reminder of where women are today and the status quo doesn't resemble a perfect or even acceptable society. This picture will have a message and a whole bunch to unpack, but it also looks like the grand and well-paced picture that shows prestige fare can be exciting and riveting too.

The trailer is elevated by the peeks into not only a great cast, but one that definitely looks like they're amped to blow us away. Mulligan is a superstar in the making and one destined for constant awards buzz. She is a powerhouse in delivering her lines with an authentic fury and sincerity that proves she controls the stage. Hopefully, this will be her first Best Actress nod, and she has a cast that will allow her to shine as well. Considering this is during awards time, Meryl Streep might be getting her annual award recognition with a supporting nod here rather than the Best Actress in Ricki and the Flash. I'm sure she'll bring a great strength to the major historical figure, Emmeline Pankhurst. Brendan Gleeson is always great and his fatherly line delivery will make him a complicated villain. Helena Bonham Carter is one of those actors that everyone knows but isn't given her proper recognition as one of the best character actors in mainstream movies.

My prediction is this turns out to be a "surprise hit." This movie and Straight Outta Compton feels like movies that aren't deemed mainstream that are striking at a time when we need them and have the advantage of looking like great movies. Suffragette is the type of movie that will have legs for several weeks at the box office, which will mean it will be remembered awards time. I'm predicting a Best Picture nod and one that will deserve it.
Carey Mulligan Meryl Streep Movies Review Suffragette Trailers