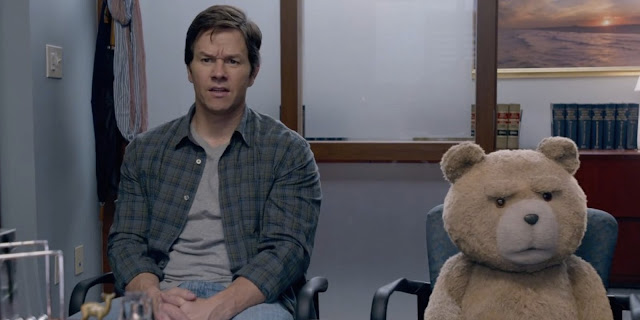 The latest Ted 2 Red Band trailer is supposed to get me all riled up for some raunchy comedy goodness and a heaping helping of cursing, but instead I couldn't shake the feeling that the opening gag was used way back in 1999 by the Austin Powers: The Spy Who Shagged Me trailer. I realize this isn't the first time in history a joke has been borrowed from elsewhere. The obvious common thread is that both comedies came out in a year that a long-awaited kick-off to a new Star Wars trilogy was being released. It does encourage my belief that Seth MacFarlane's jokes are often either rather derivative or just a parade of 1980s pop culture references with a "fuck", pot or a dick joke thrown in (for special scenes, all three together).

My only real curiosity is how they resolve the whole Mila Kunis character not being in this movie. The original ended with what I seem to remember was Patrick Stewart promising our lovebirds living happily ever after. Will the opening gag be Stewart lied to us all? Or is pop culture obsessed MacFarlane going to do a Chuck Cunningham? Or will they just throw in some occasional, "Gosh darn it, I need to get home to my wife?" lines as a gag?

Why does this concern me so much? Well, because I wanted an excuse to post this trailer but everything in it from the pot jokes to throwing food into a blind man's ass cheeks leaves me rather flat. I thought the original Ted was funny at times and decent for a first time film director, but it also suffered from some of MacFarlane's worst instincts (feeling more like a series of pop culture sketches than an actual story, jokes trying way too hard to being controversial but forgetting to be funny).

The sequel seems to leap farther into the juvenile and to the point the viewing experience threatens to cause nausea and a strong desire to jab things in the eyes. That just isn't my favourite kind of viewing experience. But hey, it probably is still better than Chappie and I willingly watched that.
Movies Review Ted 2 Trailers