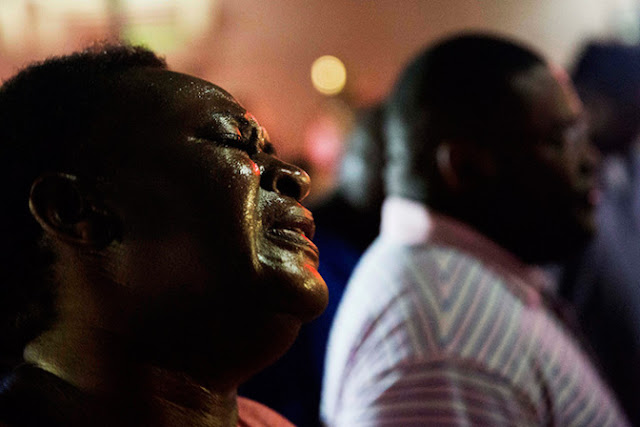 A cyanide laced bowling ball has been plunged right into the gut with the latest tragic evidence that racism is a festering plague in our society. Nine innocent Black were murdered in a shooting perpetuated by a vile and despicable White male in a shooting at the historic Emanuel African Methodist Episcopal Church in Charleston, South Carolina. The church was host to many significant events including playing a major role in the 1960s Civil Rights Movement. There has been much progress taken place since that time, but sadly, there has been many things over the last few years that has proven a rift still exists, equality hasn't been fully achieved, and a toxic hate is tarnishing further movement. Last night's atrocity made me think about the violence and attacks that took place in Alan Parker's 1988 Mississippi Burning (a Best Picture nominee), which were based on real event back in 1964, except it is now 2015.

The suspect Dylann Storm Roof is now in custody and all signs point to him acting alone. I'm sure he is missing several cards in the deck and will never be mistaken for a scholar, but this wasn't an act of insanity, but rather cold-calculated brutality. This piece of garbage sat beside the church's pastor, state Senator Clementa Pinckney, for an hour during a Bible study, and then after it was finished committed the senseless violence that killed the pastor. I can't imagine the evil it takes to be surrounded by a congregation worshipping and praising and embracing warmth then unleash the most hateful and cold-blooded act possible. This was likely entirely created from one deranged and malicious mind, but it was fuelled by true racial tension that has been flaming through the area. This happens only a few months after protests in the same area erupted after a cop killed an unarmed black man and then planted a Taser beside the body. An issues that was volcanic due to decades of racial tension that have at times simmered and other times boiled over.

It also comes after countless protests and riots from wrongful deaths of black males in America. Unrest coming from people feeling they can't trust or feel safe from their authority figures. It has been a raging debate from two opposite sides and both have committed their misdeeds. Through the protests and uprisings that have at times gone way too far, the message has been an entire race feeling that progress hasn't come far enough and the persecution hasn't subsided. Now, we have an act of violence that feels transported from some sadistic time machine from a period that we all wanted to have escaped and forget. The marches and screams have always tried to make clear that these things aren't buried in the past.

The shooting was committed by a single man, but this is the cruel and fatal result that comes from some of the hate-tinged rhetoric from the far right that has turned Blacks into "The Other" and tried to demonize their backlash against prejudice. No one will endorse last night's actions and even the racist trolls that poison comment threads will remain quiet today. There has been a dialogue that spurs and encourages these shitheads into believing they must become dark saviours and take back what they believe is rightfully their own. It is an attack against multiculturalism and change and understanding and most definitely love.

Love is what we need today. A prayer that somehow some understanding and compassion can come out of this. That we can sort out the real causes here. Most importantly, try to uplift and support each other and recognize we still need to fight for change. A change where we stand by the truth we are all brothers and sisters.

This is why art needs to continue to uncover the hatred. It needs to reveal the longstanding pain and suffering. It is why pictures like Selma and 12 Years a Slave are still crucial and relevant to today. It is also why a movie like Straight Outta Compton coming out in August is going to be very powerful and important. Hopefully, through the slickness and violence and uncomfortable moments, we can see that important message. Remember the necessity for love.