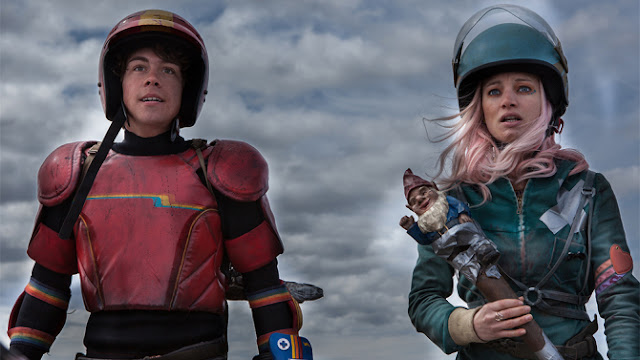 Self-aware tongue-firmly-in-cheek 1980s horror throwbacks is an emerging trend in the indy movie scene. But B-films in the 1980s weren't just horror, and there were an army of terrifically cheesy and campy sci-fi adventures clogging up the cinemas. Based off the Turbo Kid trailer, this movie is intent on fully embracing the zany and cartoony vibe of the long lost sci-fi camp adventures of another era. The only thing missing from the trailer is the "In a world. . . " voice-over intro.

This is sort of like a candy-coated, Saturday morning cartoon influenced, Canon films looking space version of Mad Max except the bad-ass cars have been replaced by bikes. It also is taking itself far less seriously and proudly shows off its sub-par special effects and has an aesthetic that reminds me of the cover art of an Atari game box. It is definitely aiming to kick-off right away as a cult classic that is gobbled up by the late night viewing crowd.
Movies Review Trailer Turbo Kid