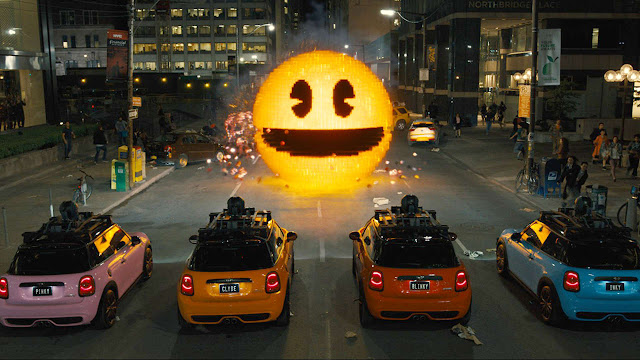 I am never shocked and can mostly understand the pre-release contempt many critics have for most Adam Sandler pictures, because this is the man that over the last few years has served us up That's My Boy, Blended, and Jack and Jill. It can be rather hard to win an argument claiming Sandler stills cares about more than just collecting a pay cheque while taking his vacation (his locales usually have no purpose other than Sandler likely wanted to tan and relax there in-between filming scenes).

What I don't get is the latest onslaught that Pixels looks lazy, unimaginative, and a quick cash grab. Sure, if it turns out to be jammed with the typical deep into the toilet bowl humour that has been slopped on the actor's last several wide releases then it can be retroactively declared that the old-school video game characters coming to destroy the Earth was a pure marketing effort to draw in the 1980s nostalgic crowd and their kids. When it comes to high-concept sci-fi comedy for the popcorn munching crowd, this is actually pretty brilliant and I've had a cautious excitement for this picture since it was announced.

It is a movie starring Sandler but the man has made good movies before and maybe this is his attempt to actually deviate from his most recent work and reclaim some box office glory. Special effects focused action-comedies tend to allow the sizzle and visuals to overwhelm the jokes and stories, but again, the premise of this movie is far more original and compelling than most past attempts. The gold standard for this genre is Gremlins and Ghostbusters, and the former was actually written by Pixels director, Chris Columbus.

My point being, I can understand not gushing over this movie or being incredibly hesitant about its quality. If I could make a killing on betting Rotten Tomatoes scores, I'd wager this will score in the basement. But the whole idea that this story is lazy and stupid seems to be more of a case of who is the star rather than the actual idea that hardcore 1980s arcade gamers are assembled to battle aliens who took the form of the iconic figures like Pac-Man and Donkey Kong. Even those that are writing this off as typical Sandler are ignoring the fact that Columbus isn't from the usual Happy Madison crew and so this isn't even really being approached as "that type of movie."

I'm just not convinced that the early contempt and passing it off as a disaster would exist if this movie was starring Bradley Cooper, Zach Galifianakis and Joseph Gordon-Levitt. I'd actually prefer that cast, as long as Peter Dinklage was still attached as well, but it is rather pretentious to assume Sandler, Kevin James and Josh Gad's involvement is suddenly enough to make the movie rancid. It will be interesting to see if the crushing reviews end up being about the actual movie or more what certain critics feel like they're expected to grade it because well, this is what you do with Sandler.
Adam Sandler Movie Pixels