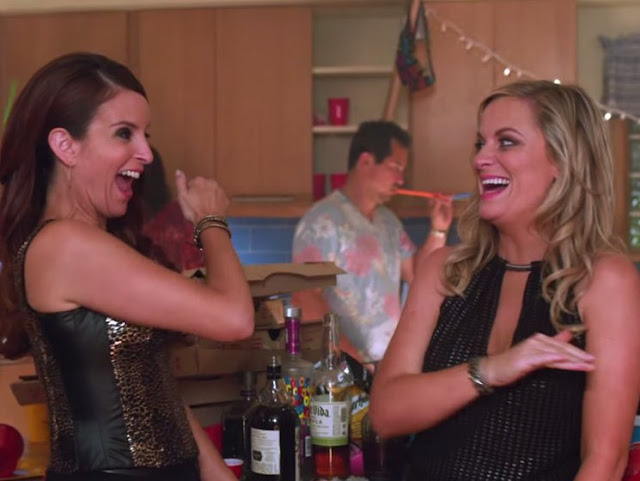 Amy Poehler and Tina Fey are the "you just have to love and adore them" type stars in Hollywood. They're beautiful, smart, and funny, but they also always feel sincere and relatable. They also have the talent to jump into characters that in real life you'd avoid their phone calls and take the long way to work to miss but make them into someone you want to cheer. That seems to be the case with Sisters, a movie where their characters try to throw one huge 1980s college movie style party in the house that their parents just sold. It looks really broad and goofy, but the leads' charm pulls through and I have hope some of the real laughs are being saved up for the movie (what a novel concept).

Even though both women have been able to tackle diverse roles, Tina Fey usually plays the more straight and narrow type while Poehler will be the ditzy and dorky comic relief. This was the dynamic for Baby Mama. It looks to be a switch here and both seem to be happily embracing their roles.

The cast is really promising here, with Maya Rudolph always an asset to any movie she is in and I like that Ike Barinholtz seems to be playing a very different character than his one on The Mindy Project. John Cena's non-wrestling thing now is to play the cameo love interest in female-led comedies as he appears in this and this weekend's Trainwreck. Obviously this trailer got dropped now, because it will be premiering on the big screen before Amy Schumer's movie.

The release date of this actual movie is rather intriguing as it shares opening with Star Wars Episode VII: The Force Awakens. At first glance seems like a major miscalculations since Star Wars is the event movie of the year and likely to make an obscene amount of money. Except there is a history of smaller counter-programming movies to do really well sharing the weekend against the monster blockbuster. Sisters should be the soothing and tantalizing lotion to those not interested in a journey to a galaxy far, far away.
Amy Poehler Movie Sisters Tina Fey Trailer