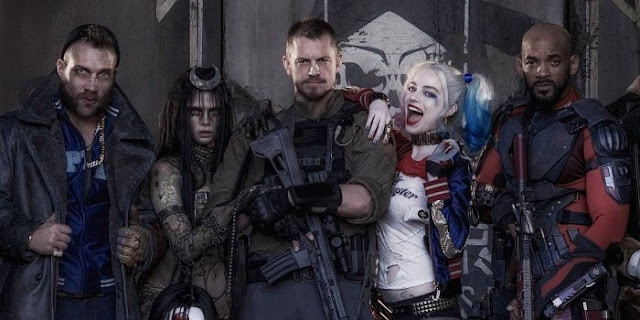 The Warner Brothers apparent mandate of all comic book movies must now look grey, drab, and dark continues with Suicide Squad. There also seems to be a need for every movie to be extra-super-serious to separate itself from Marvel movies and that along with macho talk is guaranteed with David Ayer helming. The premise of the Suicide Squad where super-villains are forced to work together and fight for good is pretty brilliant, but I'm not entirely convinced on the timing of this. Warner Brothers is still in re-introduction mode of their cast of characters, and I'd have assumed they'd save the antagonists for their respective super-hero movies before branching into spin-offs. Unless the idea is that Joker won't even be the big baddie of pure evil in an upcoming Batman feature. Of course, Batman is in this one too as he is shown hanging from a car in a clip and that seems to follow another studio mandate that the one character that has proven to be a box office draw now must be in every DC Comics movie ever. I'm sure his inclusion is meant to add layers and remind us the heroes are actually villains, but I think it continues the overstuffed plague that was also glaringly exposed in the Batman v. Superman: Dawn of Justice trailer.

Will Smith is almost always likable, and he has a burning chemistry with Margot Robbie in Focus. She has become one of my favourite new people for big studio movies because she has a great charisma to go with her incredible beauty. Hopefully, their inclusion and likely being the central characters makes up for things like Jai Courtney in yet another major movie or maybe this is the one where he'll win me over. I love Viola Davis being included because she should be in everything, and being the mastermind with unknown goals is terrific casting since you want to cheer for her even if she turns out to have dubious motives.

I think this should be a one-off, as a trilogy with super-villains saving the day is going to muddy up the cinematic universe, This of course means there will end up being 6 of these movies, along with each of these villains being the evil we must boo in other movies.

One more thing, I mentioned it on the podcast but not sure if I mentioned it here, I love Jared Leto's take on the Joker. If we're going to have yet another version of the character, it is time for him to look drastically different and also feel like something new. Besides he still is obviously a psychopath, and that is the most important part of being true to the character anyway.
Jared Leto Margot Robbie Movie Review Suicide Squad Trailer Will Smith