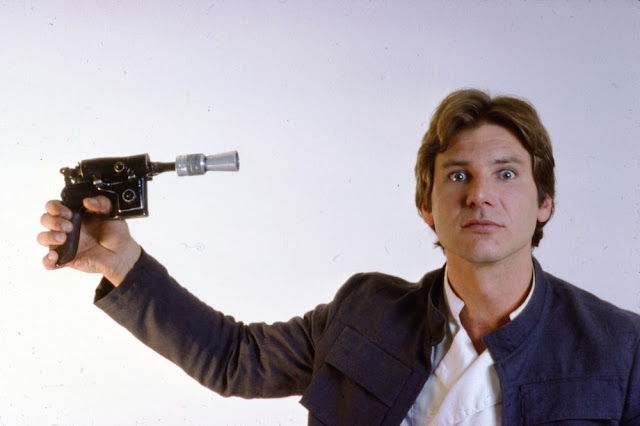 During this week's episode of The Movie Breakdown, I mentioned Disney and Lucasfilm's obsession with filling in every single story hole that could have possibly been left by the original Star Wars trilogy. The Hollywood Reporter has revealed the latest "nothing can ever be left to the imagination" deal with Christopher Miller and Phil Lord attaching themselves to a Star Wars anthology movie about a young Han Solo with a script written by the father and son duo of Lawrence and Jon Kasdan.

This is yet another example of a studio trying to mine a very popular and recognizable brand even if every fan can see that it is a really bad idea. Han Solo is Harrison Ford, because even if the actor was never a big fan of the franchise and seemed to always want to be killed off, he personified the roguish smuggler. No matter how cool the story or even great of a job the actor playing Solos does, the entire time the audience is going to be thinking "this isn't Solo." I guess you could cast Anthony Ingruber who pulled off a young Ford wonderfully in The Age of Adaline, except there isn't any evidence he can carry the same charisma and presence necessary to be Solo. That is also ignoring the fact that we don't really need yet another prequel in the Star Wars universe when the place is expansive enough to introduce new characters and new worlds. Plus their history of dipping into the past is suspect and spotty.

Except of course, I'm aware that a new character isn't instantly recognizable and doesn't carry the same hope for a box office smashing weekend. Though I don't think a baby-faced learning-the-ropes Solo is a guaranteed hit maker either, considering this movie isn't scheduled until 2018 where we've already been fed three straight Star Wars based movies and won't have the same cravings by that time.

A story about a cocky, suave and anti-heroish smuggler is wonderful, but I don't think that means it automatically has to be a young Han Solo. I'm sure there are many more smugglers around that can also have a Wookie as his pal or maybe some other furry alien co-pilot. This can be the time we discover Twan Double, the long-lost cousin of our favourite charming space pirate.

It looks like every Star Wars spin-off movie (sorry, sorry, anthology movie) isn't going to contain an original idea but either has to be a story point that was left unfilmed from the original trilogy (Gareth Edwards' stealing the Death Star plans movie) or an unnecessary origin story (we're also being threatened by a Boba Fett movie, which is a whole lot less cool now that I know he is just a clone).

There is some hope with Miller and Lord being in charge of this picture. First of all, they will likely be self-aware of how silly this movie idea is and find ways to shake things up and poke some fun. These are also the wizards that actually made a barely remembered 1980s TV procedural into a legitimate franchise and a potential feature length ad into one of the best movies of last year.

Plus they're really busy guys now being the stewards of the Lego franchise, scheduled to direct a Flash movie, writing the script to an animated Spider-Man movie, producing The Last Man on Earth series, and being involved with the next 21 Jump Street sequel. With all those things filling up their plate, maybe we'll get lucky and they'll just forget to film this movie.
Christopher Miller Han Solo Movie Musings News Phil Lord Star Wars