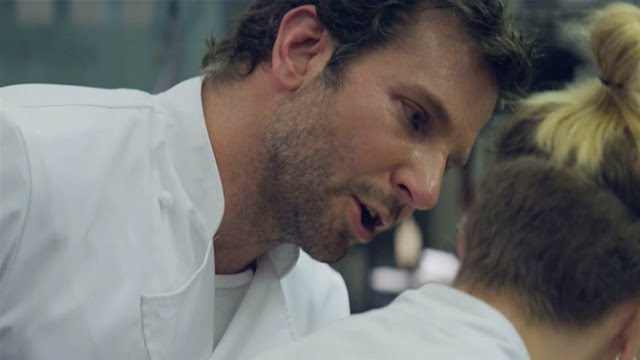 The Bradley Cooper starring Burnt so far looks like a pretty formula sports picture where the star athlete has fame and riches but crashes then must recover to reclaim former glory by winning the big game. The sport this time is fine-dining cooking and the big game is achieving a Michelin star restaurant.

We've had two other movies about super talented chefs in the past year and both of those definitely followed typical formula. One movie was the warm and full of energy Chef that made you smell, taste and salivate over the food, which turned it into a delightful and delicious summer relief to the bigger summer blockbusters. Unfortunately, the other movie, The Hundred-Foot Journey, was weighted down by its tropes and predictability that never allowed its characters to shine or its cooking to dazzle.

Going along the sports path, Southpaw is another picture stuffed with clichés and tropes that are firmly planted to the formula, but it has riveting performances and directing that made the fights have the sweat flung upon you and transport you right into the ring for crushing blows. You felt the sport and were instilled with the passion

Even if Burnt turns out as typical as it seems, it can work if it throws us into that kitchen and makes us feel the passion that Adam Jones has for cooking. We need to taste and crave the food and get intoxicated with the world of fine-dining. It has the stellar cast to make this movie work with Bradley Cooper on a roll for becoming and breathing his characters. He is supported by rising talent like Lily James, Alicia Vikander and Daniel Bruhl, along with some more established names that have brought the goods lately with Matthew Rhys (holds his own with Keri Russell in the terrific The Americans series), Helen Mirren, Uma Thurman, and Sienna Miller.