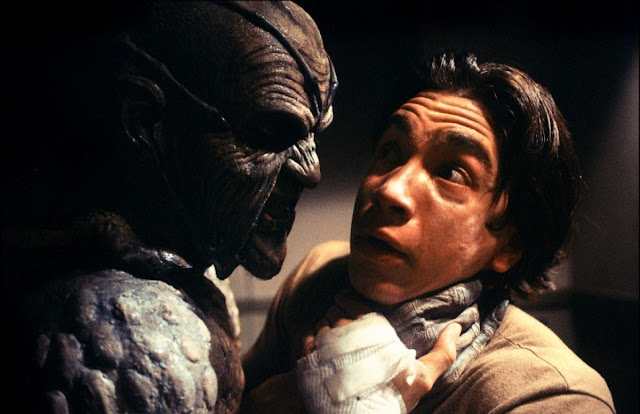 According to THR, it looks like Jeepers Creepers 3 is going to be a thing. The financer Myriad Pictures is launching their new genre label, Scoundrel, which means this will be one of their first projects. I realize Jeepers Creepers somehow has stumbled its way to having a cult following with some horror buffs and I've read a fair amount of praise for the original (while the sequel usually gets panned), but I'm going to have to throw up my hands in bafflement on this one. The first time I saw Jeepers Creepers was based off a recommendation from a friend and after seeing the movie, I started accepting applications for his replacement. He was definitely banned from going to Blockbuster with us (back when that place wasn't an ancient tale to wow the young ones).

I found the protagonists to be irritating and the run from the big scary just seemed like formulaic horror. Also the whole scene with the baddie sprouting wings led the movie down a path of ridiculousness and the mythology felt like something they sorted out on a napkin in between takes. But again, I know there are many horror fans that loved the original and are likely salivating for director Victor Salva's return to that dark world.

If this was a franchise that needed to continue, this is the right time for it. The horror scene is still stuffed with haunted houses and unseen poltergeists that prank poor families. We seem to be heading towards the end of this trend and so it is time for the next horror subgenre to crawl out of its tomb. The Creeper (I guess that is his name) is an actual living monster that has heavy slasher leanings, which compared to the modern landscape is almost fresh and original. It likely won't be those things, but it is at least a change. The production better get scooting since movies like Krampus are going to have a jump on the stalking monster genre, though Jeepers Creepers will likely at least try to play it straight (I seem to remember laughing more than I should in the original).
Horror Jeepers Creepers Movies Musings News Sequel