The Mysterious and Emotionally Charged Force Field at Everett's School 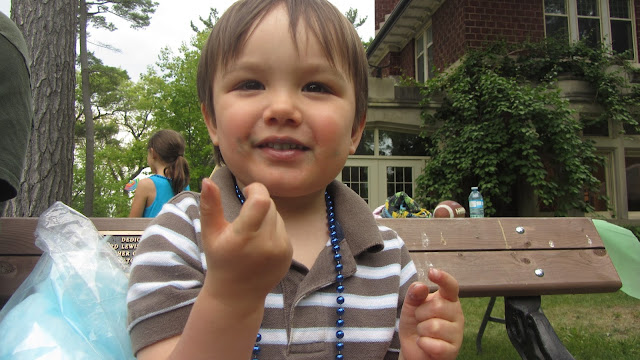 I've noticed a rather mystical occurrence at the school that maybe Scully and Mulder should investigate. It has been obvious that Everett is having a great time at school and even his teacher remarked he has acclimated quickly considering he is still three and never had experience in daycare. Speaking of his teacher, every time her name is mentioned at home, he gets a shy smile and gleefully mentions she is pretty, in a clear sign my son has a teacher crush (one of the grand coming of age experiences that every boy deserve even if many may get robbed) Throughout the evening into the morning preparation then spilled into our walk, he will not only regale me with stories of his time at school but also excitedly tell me about his plans for that day. One day he talked about how he needed to bring his miniature toy magnifying glass to school because his teacher could use it since she always talks about "discovering."

Then at the beginning of this week, something would happen the moment the school came into our vision. The excitement would puff away and Everett would chant how he didn't want to go to school. It was as if we walk through a force field that altered his demeanor and shoved in irrational fear. Some may think it was the towering students that ran around the property who may be intimidating Everett, but I prefer the mysterious force field theory.

Then the school bell would trigger outright panic where Everett would cling to me and demonstrate Herculean strength forcing his teacher into a monumental battle of tug-of-war. He'd pull away from the door as if it were the gates of hell or a screening for I, Frankenstein. He'd bellow out cries that are more violent and anguished then when he got stung by a bee earlier this week (for that, it hardly even warranted a few tears according to his teacher). I've been informed that the moment he hits the carpet and it is time for school to commence, the effect of the force field and emotional triggering bell wears off. He is back to the excited and joyful boy that I love and get at home.

The fact it was a few days ago that I planned to reveal this nasty conspiracy to the world has meant the mastermind has already softened his torture. On Wednesday, we got onto the grounds without any chants for escape and it wasn't until the bell that some tears seeped through. Even then it wasn't a titanic struggle and it was just some mild protestation as a teacher took him into the building.

The last two days he just needed a light tap towards the teacher and promises of seeing a caterpillar to get him moving on. It looks like a day where Everett doesn't force me to hide my heartbreak and witness his emotional transformation may be very near.

Then again, the weekend is almost upon us and it gives that dreaded mastermind a chance to re-power the force field on Monday.
Everett Humour Musings My Life Parenting