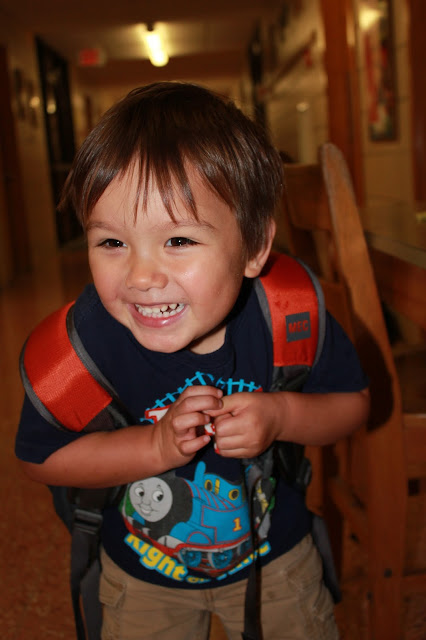 The very observant reader may notice that today is Wednesday and places like Google were touting yesterday as the first day of school. I believed such a thing to be true for Everett until the surprise phone call from his teacher at about ten to eight yesterday morning. I thoroughly detailed the first major twist in Everett's school adventure in yesterday's post.

As well yesterday, I detailed the accumulation of anxiety and volcanic emotions over my boy entering his next big significant change in his life and the signifier that he is miles away from being my baby boy anymore. Though he didn't officially go to school yesterday, I did get to feel out an Everett-free day as he ventured off to 'Grandma School.'

Since I got all the fretting and emotional roller coastering rolling before that fateful teacher phone call, I started off this morning feeling rather flat. I knew this was the first real shipping off into a new and strange land, but the mind and heart already did the twisting and turning on Tuesday. It sort of felt like the routine had already begun. Or at least that was how it was when I was getting Everett ready for school. Today, Everett was even more cemented to his bed and less thrilled about the prospect of calling it morning. He tried to convince me that since it was still dark out that it can't be morning. 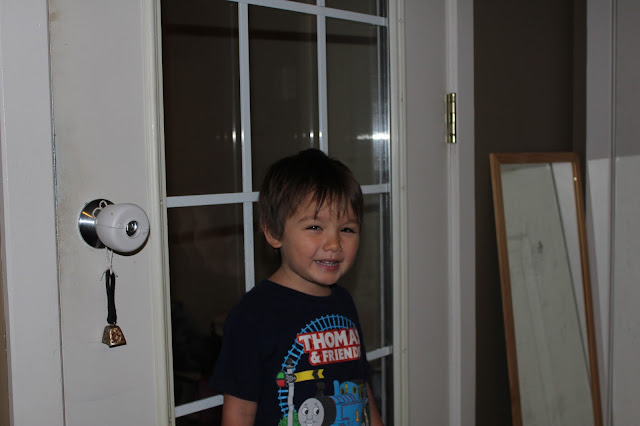 The reality is that Brantford is a cloudy and rainy day; this is why the sun bailed on his first day of school. I assume it was the angels doing all the crying for me so I didn't embarrass myself in public. For a boy who bases the time of day on how bright his room is without the light switch turned on and also seemed to have used up his first day adrenaline yesterday, the darkness was the enemy in getting him motivated to kick-off the day.

Though once breakfast was being consumed and the lunch bag started getting packed along with me spouting the hype of meeting new people and playing new games, Everett started the bouncing and giddiness over the new adventure. Once breakfast ended, the "why aren't we going to school yet" kicked in, which is the clearest sign Everett was excited. Though the promise he could play with his puzzles while we continued to get ready seemed to be an even greater prospect. 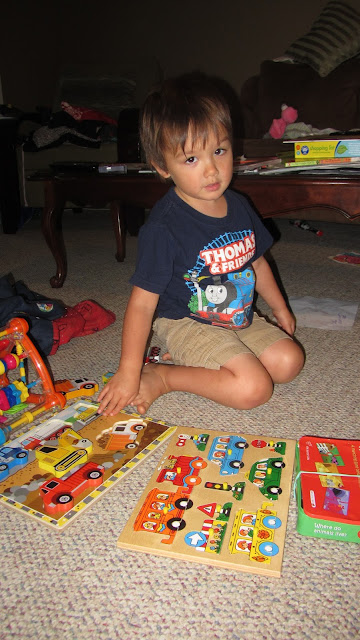 My vision of Everett's first day of school didn't quite mesh with reality. First of all, I had plans of a nice family walk to his school, but the wall of rain suggested a car ride would be much better. Everett also was amped for a walk but we convinced him that going for a swim would be better after school and in a pool.

When we arrived at the school, while I was trying to acquire the skill of holding an umbrella and a baby (I have enough trouble mastering the science of positioning an umbrella so it doesn't get caught in the wind when I have two free hands), Everett told Emily he was scared. Emily reassured him that was a good feeling and school would be amazing. It is best that I didn't find out about Everett's fear until I got home. At this point the butterflies where ruling the stomach and the emotions of the Tuesday where back with the added power of the real physical school building taunting me. Reassuring my son would be a harder task with my face full of streaming tears and my voice wobbling with searing emotions. 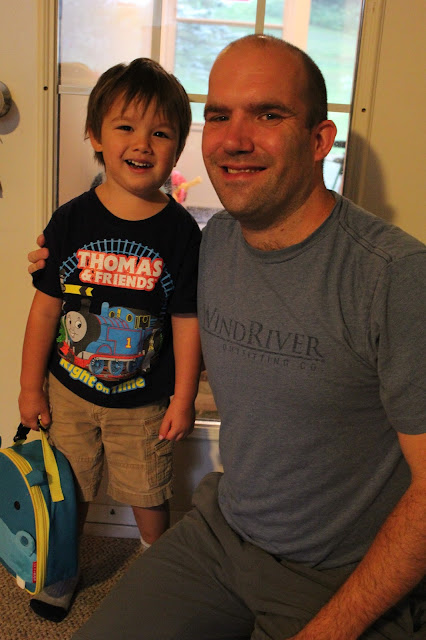 I had imagined the first day of school to be an event where I meet the teacher and get to scout out the arena that would hold his education for the year. I'd give him a bearhug and get one last glimpse as he jetted towards the puzzles. Much like me thinking he was going to school on Tuesday or that Neill Blomkamp would make great movies after District 9, it was pure fiction.

Instead, we were greeted at the door by a lady who swooped in to snatch Everett's hand and told him to say good-bye. That would have been that if it wasn't for Emily requesting that we at least take one more picture of our boy who was experiencing school for the first time ever in his life. Then I, of course, needed to give him one more hug and kiss, because otherwise, I likely would have turned into sentient Jell-O without the final contact. 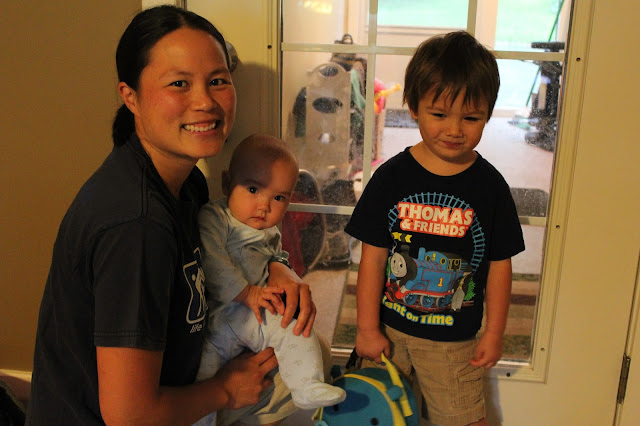 Then Everett took the hand of the mystery lady (I'm pretty sure she didn't even offer her name) then she passed him off to a student who led him down the hallway as Everett's gigantic saucer-eyes scanned the mysterious new location. He looked back as his parents became smaller and smaller and everything turned stranger and stranger. That was Everett's first experience and from there it is all unknown to me. 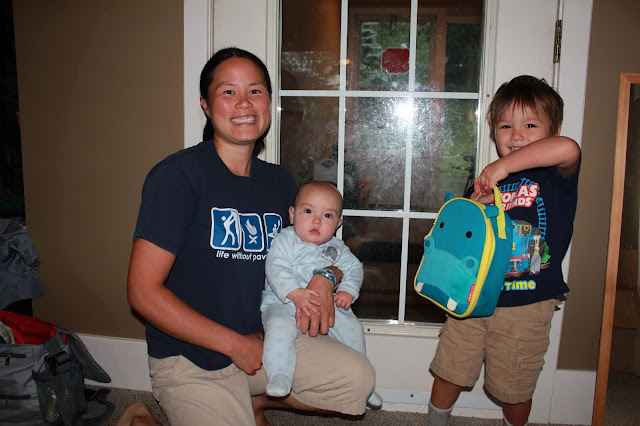 I have no clue what his classroom looks like. His teacher at this point is nothing more than a voice on the other end of the phone. I don't even know if she has a body or is human. Maybe that is why they didn't want me to go to the classroom. They didn't want it revealed that she is a radioactive chipmunk with the power to speak and recite the alphabet. Or maybe she is nothing more than a benevolent spirit who loves children and goes by the name Casper.

I think I will need to insist on meeting the teacher when I pick him up in a few hours. 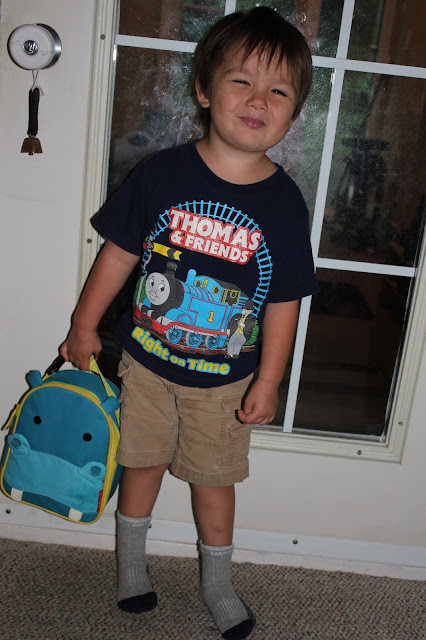