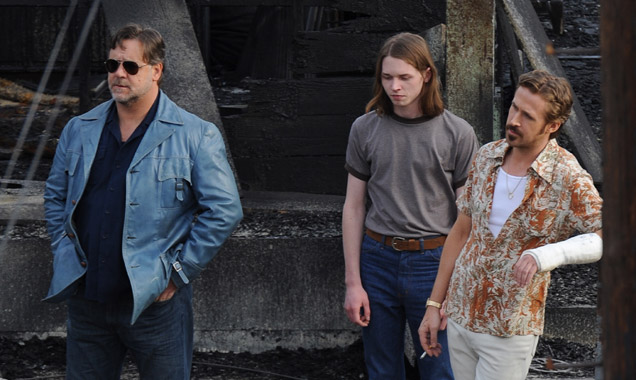 The Nice Guys is the kind of picture that 35 years ago would have been targeting to be a summer blockbuster. All the elements that would have made it huge mainstream entertainment then, is why it is peculiar that it is currently slotted for the franchise heavy month of May. It's an adult-aiming buddy action-comedy with unsavoury characters that is noirish, violent, profane, sexy, stylish, and star-driven. If this movie came out in the 1970s or early 1980s then the plot of two opposites being forced together to solve a missing person case that uncovers some bigger crimes would be lost in a sea of similar pictures (48 Hrs. immediately jumped out at me, which was a huge hit in 1982). Now, the summer months are filled with franchise pictures about super heroes focused on saving the entire world from an imminent catastrophe that are sanitized and 'safe' to sell to the teenage crowd, which makes a story about solving a disappearance that has ample amount of nudity, swearing and is subversive feel fresh and original today. Ryan Gosling as the bumbling private investigator is pretty great in this trailer and has a solid chemistry with Russell Crowe's tough guy who is willing to lob the softballs to make the pairing work. I love the old-school WB logo, the 1977 Los Angeles setting, and the comedy doesn't cover up the edge. I can find Shane Black directorial and writing style to be a little too self-aware at times, but he has also proven to be quite adept at jumping between genres in a single movie. This has skyrocketed right to the top of my most anticipated 2016 summer pictures.