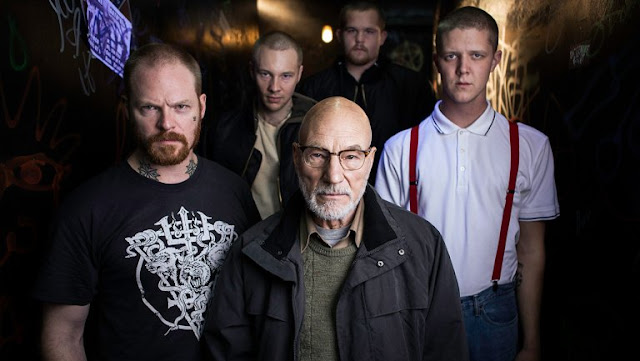 Green Room is Jeremy Saulnier's next step in making incredible movies with color based titles, so that when he becomes one of the hottest filmmakers in Hollywood he can release a box set called "The Rainbow Anthology." Or so I assume. I was a huge fan of his 2013 revenge flick Blue Ruin about a mild mannered man who was completely out of his depths in seeking vengeance against those who killed his parents. It was a well-paced and atmospheric thriller that had ample amount of quirky and dark humour based on the fact that our protagonist didn't have a killer instinct or a clue what he was doing. It had all the beats of your typical revenge thriller, but revealed what would really happen if your average guy tried to be a violent avenger.

Green Room seems to have more typical thriller beats with a punk band seeing something they shouldn't have and now trying to stay alive while being hunted down by some nasty neo-Nazis. Okay, maybe that doesn't come out every other week in the cinemas, but my point is the trailer seems to suggest a more action oriented "heroes must rise above to survive" type plot. Of course, a trailer usually is designed to seem typical and save the twists for show time, and I trust Saulnier has something special here just based off the genius of Blue Ruin (have I stated enough how great that movie is?).

Even if I'm wrong about some surprises, this looks to have a really chilling atmosphere and could end being one that leaves fingernail marks in the armchair. The cast is terrific with Imogen Poots proving herself in the independent scene, I was a big fan of Marc Webber in the underseen 13 Sins, and Anton Yelchin is getting some deserved recognition from his performances in bigger movies like Star Trek and Fright Night (which he starred with Poots). Though the biggest selling point besides loving the director, is seeing the usually warm and lovable Patrick Stewart play the sadistic and violent leader of the gang hunting down the protagonists. Scheduled to be released on April 15th in North America, but I'm already assuming I'll be forced to wait for its Netflix debut later in the year (I hope).