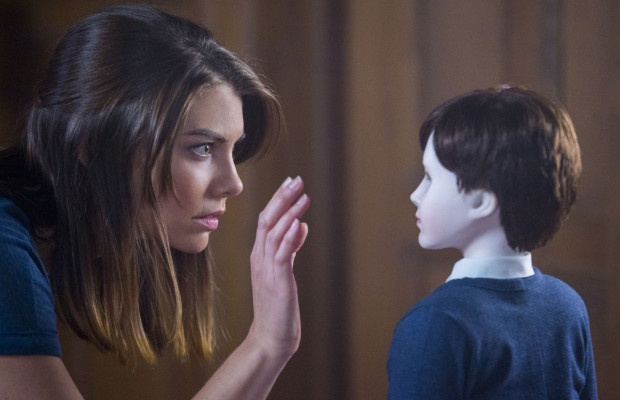 The Boy is a story about a woman who leaves her abusive boyfriend for a tender and intimate relationship with a porcelain doll. It's a plot that doesn't scream hot new horror feature, but is at least an attempt to do something different with the creepy doll subgenre that is much older than the scary clown doll from 1982's Poltergeist.

Director William Brent Bell is effective in making a dark and chilling atmosphere with the large Gothic mansion, long shots of creepy hallways, an ominous score that is edge-of-the seat worthy, and of course, that really freaky doll. The creepy mood is undone by a campy and at times outright ridiculous screenplay written by Stacey Menear. Lauren Cohan plays Greta who takes on a job of nanny for two creepy old folks, who after losing their son Brahms to a fire twenty years ago, now have a porcelain doll as his substitute. For large portions of the picture, we get to see Greta comfort and bond with the doll. These scenes caused this horror to elicit more chuckles than the intended screams at my screening except for the guy sitting beside me who must get frightened every time he turns the crank of a jack-in-the-box.

It doesn't help that the movie is populated with characters that are either morons or victims to the convenience of moving along the plot. Greta is alone in a creepy mansion but thinks it makes perfect sense to venture up the attic after the entrance is mysteriously open. After it becomes clear that Brahms is possessed and starts to terrorize her, she is convinced to stick around and play mom after a mere offering of a peanut butter and jam sandwich. Jim Norton and Diana Hardcastle are appropriately disturbing as the elderly Heelshires, but their mannerisms drastically change from scene to scene that they must be victims of extensive rewrites. Then there is Greta's loving sister back in America that doesn't think anything of her 10 year old answering the door for a violent stalker and just kind of shrugs when the stalker gets Greta's address -- the person she moved to an entirely different country to get away from.

A collection of stupid people in a horror movie is pretty common and none of this would matter if The Boy was scary at any point. It isn't. Instead we suffer through the eye-rolling dream sequences or scenes obviously set up for the inconsequential jump scares. The story is weighed down by being derivative of movies like Child's Play or the countless haunted house pictures jamming into the cinemas over the last several years. It all builds to a rather unsatisfying twist ending that is derivative of an entirely other subgenre of horror picture that I can't reveal the movies or I'll spoil the ending. Though if revealing it then stops you from seeing it then that wouldn't be a bad thing.

Cohan is the best part, and her experience as a main cast member on The Walking Dead means she isn't above throwing herself entirely into this role. She brings an emotion and nuance that exceeds the requirements of the script. Even though Greta is one dimensional, Cohan gives her a strength and vulnerability that makes me almost care despite the absurdity on the screen. It left me begging that her great talents are allowed to shine in a much better movie.
Horror Laura Cohan Movies Review The Boy