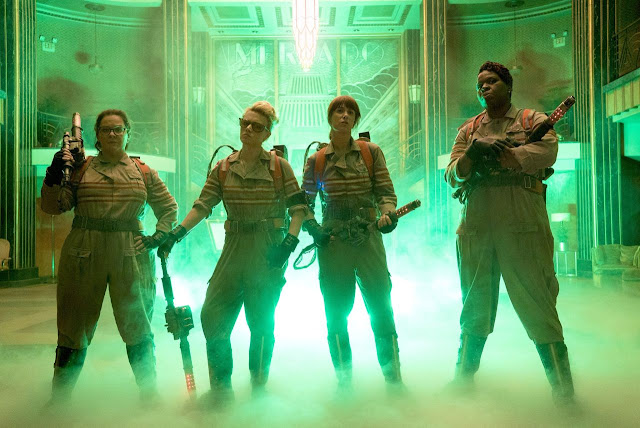 Next to Star Wars: The Force Awakens, this summer's Ghostbusters reboot/sequel has been the most talked about feature over the last year. The big difference is this picture has probably had 50% anticipation and 50% whines and groan about how this will murder our childhood forever. The biggest moans have come from sexists that are annoyed it is an all-female team, but there is also some pissing from the people that just get huffy whenever something seems an ounce different than what they remember as a kid.

It is the same crew that hates Jared Leto's Joker from Suicide Squad because apparently, these people are unaware of DVDs and Blu-Rays that allow you to watch things from the past thus eliminating the need to do exact replications now. I was in the crowd that didn't have the least bit of interest in seeing Dan Aykroyd and company put the suits back on and was even less interested in a version with Jonah Hill and Seth Rogen. The addition of female comedians isn't a huge difference maker but did show an attempt to at least do something slightly different. There really isn't any reason to return to a property unless you've got new ideas or are going to try a different direction. This is why no one has ever said Gus Van Sant's Psycho is their favourite movie ever but also why every critic screamed their praise for last year's Mad Max: Fury Road.

Based off the first trailer that has finally dropped, it looks like director Paul Feig is going the Ryan Coogler's Creed and J.J. Abrams' Star Wars: The Force Awakens route of hitting a lot of the same beats of the original but adding in distinctive touches to form something new. It even looks to be following the idea of three scientist friend starting a business together and the Black non-scientist coming along later for a pay day. At least this time, it is going to happen earlier in the movie and Leslie Jones is getting material to show off her comic chops. I've been a fan of Melissa McCarthy and Kristen Wiig for a very long time, and since I gave up on SNL over a decade ago, this will be my first chance to really enjoy Jones and Kate McKinnon.

The people who decided they were going to hate this will still spout their bile after this trailer. But this looks to have captured the spirit of the original and I even laughed a few times, which rarely happens in comedy trailers. I'm predicting this will be a pretty huge hit this summer as McCarthy and Wiig have their fans and from what is shown, this properly showcases each comedians' strengths and skills. This should be real fun.