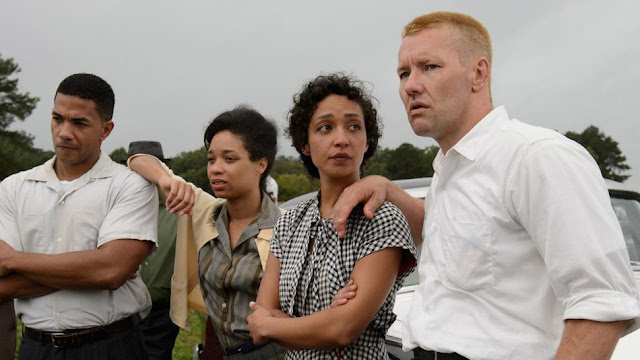 The Academy of Motion Picture Arts and Sciences has made some big changes this year in response to the #OscarsSoWhite and other criticism over the past few years regarding the lack of diversity in nominations. In January, they made major rule changes on eligibility for voting and then in June invited over 683 member to join that consisted of 46% female and 41% people of color (a group that includes Idris Elba, Alicia Vikander, America Ferrera, John Boyega and Marlon Wayans). The moves towards diversity don't matters if next January all the nominations are for white actors and movies about while male stories again.

This is why director Jeff Nichols' Loving that is being distributed by Focus Features (a history of backing Oscar contenders) and getting a very Oscar friendly November release has to be considered a strong awards contender even if only the over eager festival crowds have seen it so far. The story is about Richard and Mildred Loving who are arrested for getting married because interracial couples were illegal in 1958 Virginia. It was a landmark case at the time and one of the major events during the early stages of the Civil Rights Movement in the United States. It happens to be based on a true story, which right there is enough to make it a favourite, but even more now that Academy is eager to show their open-mindedness and diversity.

I know I'm sounding rather cynical here, but I actually do want Loving to be good and deserve some recognition. It also has all the ingredients to be a really great movie. Jeff Nichols has served up terrific movies in Mud and Take Shelter, and I'm only leaving Midnight Special off the list because I haven't seen it. He knows how to use imagery and shots to stir emotions and transport you right into the world. He is a very visual director and makes movies that have an arthouse feel, but he also takes the time to make you really care and connect with his characters. Loving is a story that seems different than his usual fare, but also something that can play to his strengths. Just like his other movies, he has both written and directed it, which makes me believe he is passionate about the material.

I'm a fan of Joel Edgerton and feel he doesn't get enough parts that are worthy of his talents. This could be his real run at an Oscar nomination. The chance to avoid another backlash of all white actor nominations, may mean a strong chance for Ruth Negga to get nominated but the trailer shows she will deserve it too. Nichols has proven he can get the very best out of his actors as well, and it would be great if they get recognition even if it is due to some pressure.

The trailer feels a little Oscar baity but I'd blame that one marketing rather than the movie. It is an important and interesting story being helmed by one of the very best modern filmmakers. I trust the talent involved will rise above the sentimentality or the need to preach, and instead be something real special. I'm guessing we will be hearing a lot about this one in the fall.