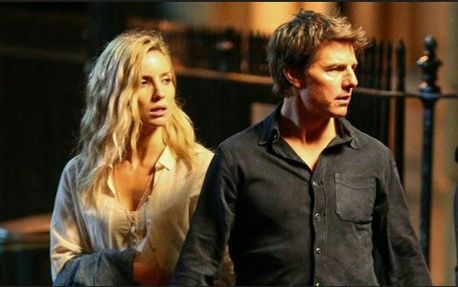 One positive about the upcoming The Mummy reboot/remake is that at least isn't just going to be a retread of the Brendan Fraser franchise. Too many remakes just end up being retreads that have no reason for existing, but being different isn't always good. While I always endorse Tom Cruise in a lead role of an action picture, I'm not totally excited about the direction of this hoping to be cinematic universe launcher. The Fraser series was campy and tongue-in-cheek homage to adventure serials that had an Indiana Jones battling ancient monsters like vibe that had a fun energy and compared to most of today's blockbusters would come off as something pretty fresh. This first trailer promises a much more intense and gritty actioner full of explosions and CGI chaos, or also known as most big studio movies we see every summer. There is nothing here that really screams different or fresh, but rather just hero trying to save the world with the villain this time happening to be a creepy century old magic lady. But maybe I'm just getting too cynical and some of you think this is a smoking bag of awesome. At least it is pretty clear we will get lots or running Cruise.

One positive is that director Alex Kurtzman is claiming that they aren't blatantly building to a big Avengers style movie right away but rather concentrating on making good movies with small little tidbit hinting towards a wider universe. The fact he and hopefully the studios are aware that the forced universe building and promoting of future movies that happened in Amazing Spider-Man 2 was a failure and the best way to get fans excited about future movies is just to make really good movies. Now, I just hope I am wrong about this trailer and this is a fun start to the Universal monsters world.
Movie Musings News The Mummy Tom Cruise Trailer