Remembering William Peter Blatty and How He Shaped Supernatural Horror 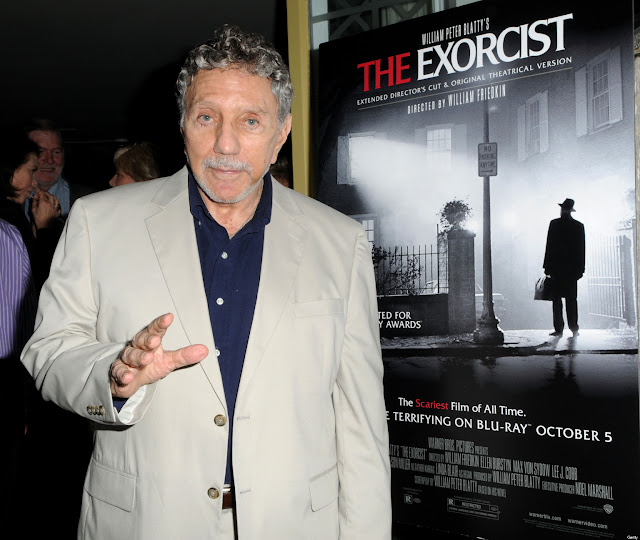 William Peter Blatty started his career as a writer of comedies including some novels and as well screenplays for movies like the Pink Panther sequel A Shot in the Dark and the Zero Mostel vehicle The Great Bank Robbery, but his legacy was the 1971 bestselling novel The Exorcist that two years later was adapted into the iconic horror movie (which he also wrote the screenplay). After The Exorcist, his cinematic contributions were sequels to his hit but he also wrote several novels that mostly were in the horror genre (more specifically, about spiritually both light and dark).

It makes me curious about if Blatty started in comedy because he thought that was an easy entrance but always wanted to explore Catholicism, the dark side of religion, and horror or if the massive success of The Exorcist dictated what he wrote afterwards. Or maybe it was neither, he just followed his muse that happened to darken after that fateful moment where he read an article about a demonic possession that he claims influenced his huge bestseller (number one on the New York Times bestseller list for 17 weeks and sold over 13 million copies).

The Exorcist is not only considered one of the greatest horror movies of all time but also one that makes many all-time great movies lists for any genre. It is one of the few real horror movies to be nominated for best picture, but it is also one of the most influential pieces of horror fiction ever. It probably wasn't the first story about a Catholic priest who struggled with his faith but then through dark circumstances is forced to embrace his beliefs again, but any time you see that type of character, it is impossible to not think about Father Damien Karras. It definitely wasn't the first about demons and the devil, as the very popular and successful Rosemary's Baby has already been a bestselling novel and hit movie, but along with that movie, it created the tropes and recurring story aspects of the supernatural horror genre. The Exorcist also has many iconic scenes like the head that fully spins around or the sinister voice coming from a young girls that have either been parodied or "borrowed" from countless movies. It is a movie embedded deep into our culture.

Blatty crafted the novel and adapted it into film at exactly the perfect time. The 1970s was obsessed with the occult and fearful of things like Satanism and demonic possessions. There are several cases over that decade about homes that were haunted and people being terrorized by ghosts or demons. There were also those who made a living fighting those poltergeists or nasty demons. The Exorcist explored something that people were fascinated about but also terrified because many felt it was real. Horror has its greatest strength when it makes us believe and connect with us on an emotional level.

Just looking at the type of modern horror movies that are big hits proves the enduring influence of The Exorcist. The majority of mainstream horror in the past decade has been supernatural hauntings or possessions of children. After all this time, people are still fascinated with the darkness of the other realm and how it will affect our world.

The Exorcist was about a 12 year old girl being possessed and how that shook her mother and changed how a priest saw his faith. Since that movie, an innocent child being taken over by something evil has become a horror staple. And if it isn't possession, then there is still a young child threatened by an evil spirit or being influenced by the evil. Just to name a few movies, there is Poltergeist, Ouija: Origin of Evil, Insidious, Sinister, Paranormal Activity series, The Conjuring, The Others, The Sixth Sense, The Babadook, and The Ring, One of the scariest things for a parent is that inability to protect your child, and it was something that The Exorcist tapped into and then many writers continued to exploit after.

Blatty never claimed The Exorcist to be based on a true story account, but he did stick to the idea it was heavily influence by a real life exorcism that he had read about. Of course, this added a new level of fright for the readers and viewers as there was this insinuation that all this could happen. This was not some complete work of fiction but grounded in truth.  Even though Rosemary's Baby came before it, it never claimed to be dipped into truth. The Exorcist's success led most writers and filmmakers to add another whole layer of terror by claiming their story was based on facts.

Now, it seems like 90% of supernatural horror is "based on true events." I'm not sure if anyone even believes that anymore or at least. I hope most realize things like The Conjuring are based on proven hoaxes and frauds A horror movie claiming we are about to witness something real has become pretty standard but  still has an unnerving element, as it threatens that it can happen to us. It really can't, but for two hours we suspend that part of our brain and allow possessions to take us over.

Blatty has passed away but he has a legacy. A legacy that will last with the horror genre always having his fingerprints all over it.
Horror Musings News The Exorcist Tribute William Peter Blatty