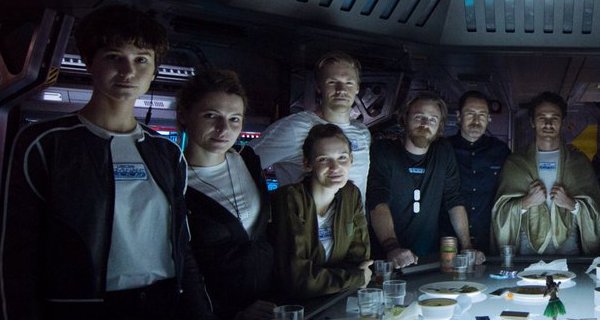 20th Century Fox dropped what they are calling a prologue teaser to Alien: Covenant, or essentially a movie short, called "Last Supper" directed by Ridley Scott's son Luke Scott (Ridley is directing the full length feature). I really love the idea of having a character-driven short to introduce the major players and to tantalize us for what is to come. It reveals the personality of the crewmembers and it garners some excitement without spoiling all the plot and giving away the major scenes. It allows for some connection to the characters before entering into the theatre for the big feature. I recognize probably 40% of the movie going audience at the absolute most will see this short beforehand, but that probably isn't any different than the two and half minute spoiler-filled ads that are promoted as major events at Comic-Cons and YouTube. This is far more creative and a better launching point going into what should be the real event. This is for the hardcore fans that are salivating for some details of Alien: Covenant, and even without showing a single scene of the actual movie, I think delivers some goods.

I understand that not every movie can do this something like this, and in some cases doing it would reveal more than a trailer. It costs money to make a mini-movie and you need to have the cast available, but I'd love to see something like this for more of the "event" pictures.

The short does give some answers, such as who all the member of the ship, Covenant (we also now know where the movie got its title), I love that there isn't any "blow your own horn" but rather just matter of fact progressiveness with a gay couple and a mixed couple. Nice to see Danny McBride willing to play the character he always plays, so I have one character whose demise that I'll anticipate. It wasn't until this short that I learned James Franco was in this movie, though I am guessing we shouldn't get used to him since he wasn't in any of the past trailers. Plus he seems to be sick, which I think hints something nefarious is already on the ship. As for the rest of the cast to be excited about, there is indy darling Amy Seimetz, character actor Billy Crudup (who based off trailers may be this movies' John Hurt), and Empire star Jussie Smollett.

The most notable thing about the crew is the absence is Noomi Rapace who at the end of the last movie was off to the engineer's planet. There was talk she wasn't returning, which made no sense, but when she was finally added to the cast, there is more mystery that she isn't with this group but David (Michael Fassbender) is back with his head safely fastened to his body. Why is David around yet Rapace's character is missing? Is her addition to the cast only in the role of flashbacks? Does David have some insidious plans with this crew and is he aware once again of an evil alien presence on the planet they are heading? What happened between Prometheus and this movie? These are the kind of cool questions and intrigue that you couldn't get from a trailer.

I also really appreciate the callback to the original where it looked like the poor girl was going to give a nasty alien birth but instead, it was just revealed she was choking. It does a good job of teasing there will be a sneak peek of an alien. Of course, this is better for the move, and things are going to get must worse than food going down the wrong pipe.