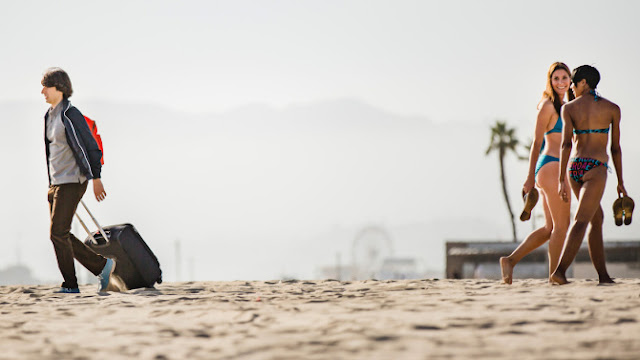 I heard about Demetris Martin for a long time before ever seeing him. My brother-in-law made it a priority for most family-gatherings to let me know that Martin was his favourite comedian and he would then rattle off a few jokes to prove his point. I finally did get around to seeing his Netflix special, Demetris Martin: Live (which I have a sneaking suspicion was not when I got around to seeing it). His style is unique compared to many modern stand-up comedians, who usually tell stories and build up to the big punchline, because Martin instead just rattles off a series of one or two line jokes that are often funny observations on social and human behaviour. The fact he does it with a low level of enthusiasm and seems almost dead serious in his delivery makes it all the more funny.

Dean is Martin's first feature where he is the star, and it is interesting that he going for less non-stop laughfest and more of a dramedy. It is about an illustrator that is trying to cope with the loss of his mother and repair a fractured relationship with his father. The trailer definitely has some funny moments but it is coated with melancholy. The fact Martin also directed and wrote this feature shows he is passionate about the material and doesn't want his emergence on the big screen to be the typical comedian route. This is an independent comedy through and through, so it won't be any kind of box office monster like a Ride Along or Identity Thief, but it may earn him some critical credibility. He is also backed by pretty strong cast with Gillian Jacobs, Kevin Kline, and Mary Steenburgen.

This has potential to be a sleeper hit, and even if it doesn't reach its potential, Martin deserves respect for trying to make a comedy that actually has something to say and dares to mix in some drama and tears.