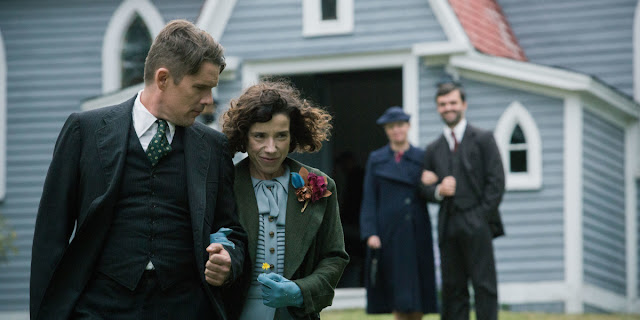 I remember as a kid if there was ever a low-budget movie with sub-par performances by unknown actors that my dad would mutter "must be Canadian" and then turn the channel. That kind of reputation for Canadian movies had stuck in the back of my mind for years and years until I saw movies like The Sweet Hereafter, Videodrome, Leolo, Black Christmas, Scanners, Black Robe, Ginger Snaps, Eastern Promises, Room, Meatballs, and The Grand Seduction. And no, I didn't just list every decent Canadian movie; despite those 1980s utterances, the list is long and proud. The above list shows that Canada has produced a pretty diverse slate of movies through the years and some of those are held up as classics.

Despite the fact that I know Eastern Promises boasted a Naomi Watts or Room has a Best Picture nomination, I still got a shiver down my spine from surprise and joy when I discovered a biopic of Canadian folk artist Maud Lewis was going to star big heavyweights like Sally Hawkins and Ethan Hawke. Of course, both actors don't shy away from small independent fare and this will likely not be a huge deal even in Canada, but I have a small patriotic thrill to see a very Canadian figure get some star treatment.

If the biopic train needs to keep on chugging, I'm glad we're getting a movie with a folksy, small town vibe that is more about intimacy than life-changing genius with the feature Maudie. Maud Lewis was one of Canada's most popular folk artists with her depictions of outdoor scenes from her small town in Nova Scotia. This looks to have a nice and quiet charm, and with it being a Canadian production, it might even make its way near me before the year is out.