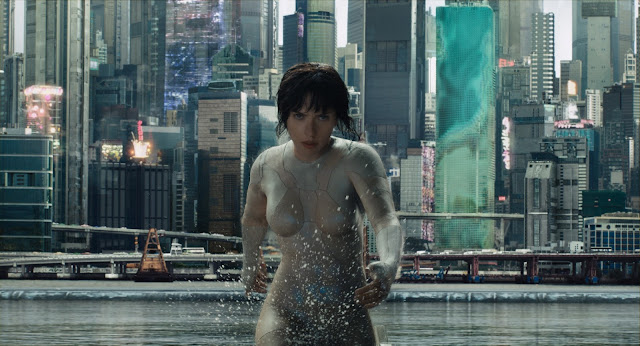 2017 is promising to be a golden year for sci-fi with a diverse slate of movies like Life, War of the Planet of the Apes, Guardians of the Galaxy Vol. 2, Star Wars Episode VIII: The Last Jedi, Alien: Covenant, God Project, Valerian and the City of a Thousand Planets, and Blade Runner 2049. One sci-fi actioner that has the anime and manga fan's salivating is the Scarlett Johansson starring Ghost in the Shell. Director Rupert Sanders and his special effects team have crafted a visually stunning world that stirs up memories of the scale and gorgeous style of the original Blade Runner. The themes, stories, and styles are snatched and reconfigured from sci-fi favourites Total Recall, Moon, Matrix, and Minority Report where she is seeking her identity, discovering she may not be who she was led to believe, and forced to rise up against the malevolent corporation. Most of the elements are pretty typical and common sci-fi, but the key will be how the movie weaves all those story elements into its visuals and action sequences. Everything in the trailer looks spectacular, and the hope is it channels some John Wick with fully choreographed action sequences that have substance and can be easily soaked up rather than ripped to shreds by caffeinated editing.

Ghost in the Shell Movies Trailer