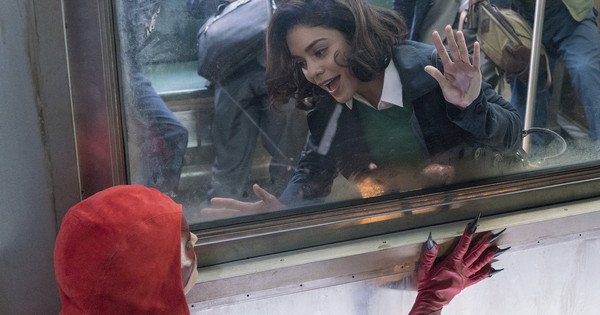 The Powerless premiere has most of the common ingredients of many classic work-place sitcoms with the optimistic and energetic new employee coming to manage a team that doesn't like her and learns her hire was with plans for her to fail rather than succeed, a boss who is a lovable imbecile, the company at risk of going under unless our plucky hero can come up with that winning product, and broad characters to represent the types the typical workers one sees at their office job. The one significant twist and what makes the premiere a load of fun is it is set in the world of superheroes and the company, Wayne Security makes products that are designed to help the average citizen from supervillain attacks or being collateral damage during an epic super hero battle.

The likable and warm Vanessa Hudgens (High School Musical series, Spring Breakers) plays go-getter and new team manager Emily Locke who is coming from a "fly-over State" which means a place where she just saw super heroes fly over them but never land to fight evil doers. Her first day during her commute on the train in Charm City, she is quite a thrilled to see super hero Crimson Fox (Atlin Mitchell) do battle with her evil nemesis, Jack-O-Lantern (Kimani Ray Smith). The gag is that while Emily is enthralled with half the city exploding, the train track being destroyed and Fox catching the off the rails train with her bare hands, none of the other passengers even raise their heads from their iPhones, books, and video games but rather just see it as the usual inconvenience on their way to work. It is a fun gag on how if super heroes and super villains existed as depicted in the numerous comic books, TV series, and movies then it would be just as typical and humdrum as getting a, incoherent text from your grandpa asking how to get into his emails again.

There are a great deal of funny little nods and jokes about the DC Comics universe that keeps up the energy in a premiere that would otherwise be considered pretty routine. When Emily asks if they have any great ideas to help keep the company afloat, one employee talks about a great idea he has but it needs a piece of the sun to power it but that is just impossible to get (that pesky sun triggers all kinds of super powers when their isn't any gamma rays or radioactivity around). They also talk about how they not only need devices to protect them from the villains, but also when the super heroes are fighting each other over vaguely defined reasons, which is a fun little knock on a recent DC comics blockbuster. Another fun scene that plays on secret identity with a casual discussion in the break room about how it is a crazy coincidence Batman now has a similar type of invention to combat Joker as the one they presented to Bruce Wayne that was designed to detect the location of Jack-O-Lantern. The mater fact delivery of most of the invention ideas or how they discuss their super hero/villain filled city is a big part of the gag.

I haven't seen much of Hudgens' work, but this series has more potential to be her big break out from children's series than the ill-conceived Sucker Punch. She is really likable and makes you want to root for her to succeed. Even though she is the typical "fish out of water" type character, she adapts quick, is incredibly smart, and proves herself before the episode even ends. Hopefully, her keeping the company afloat and winning over her co-workers means the series can move away from typical work place stories and try some directions that are as inventive as the twist on the super hero genre.

Hudgens also has a nice chemistry with her cast that includes Alan Tudyk (Suburgatory, Tucker and Dale vs. Evil, Serenity), Christina Kirk, Ron Funches, Danny Pudi (Community series), and Jennie Pierson. Tudyk is especially great as the boss, Van Wayne, and the cousin of Bruce Wayne, who is desperate for love from his more recognizable relative, calls Bruce by the name B Dubs, and desperately wants to do anything to get out of Charm City. Tudyk is an awful boss but he has a charm and energy that makes him endearing despite his incompetence. He will likely play the role of antagonist and comic relief, and hopefully, the show has the guts to allow him to develop bit as it progresses. Pudi plays another nerd type but different from his Community character, Abed, as he is less socially awkward, and this time is more obsessed with pretty colours for the inventions. The character dynamic is pretty strong and everyone seems comfortable in their roles already.

The key is for this series to continue to try to be original and not just rely on Easter eggs and nods to the comic book universe. I do have some hope with them already moving past friction with those she works for and the company clearly now in the good graces with Bruce Wayne. A good sign about the series' actual ambition is if they avoid some contrivance where Emily has to prove herself again and the company is still in trouble in episode 2. One of my favourite new series this year was the really terrific The Good Place, which started with a cool premise of what would happen if a not so good person ended up in a heaven-like place by accident but the series was brazen enough to blow past it in mere episodes to become something very different and by the end had a killer twist that entirely changed the initial premise. The series approached near greatness because it didn't stick in a holding pattern, and Powerless hopefully, has the guts to also keep trying some new thing in what is a pretty fascinating world.
Alan Tudyk Danny Pudi DC Comics NBC Powerless Review Sitcom TV Series Vaness Hudgens