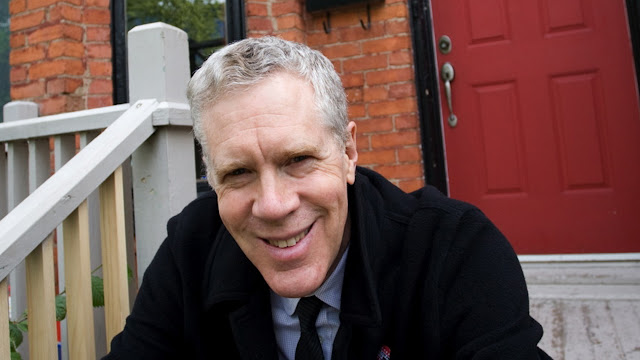 Stuart McLean was one of the great Canadian storytellers. The Vinyl Cafe was a one hour variety show on CBC Radio but I think most associate it with the short stories about his fictional characters Dave and Morley that McLean would read about each week. We actually have at least one of his short story anthology books that are a collection of those radio stories, and even though they aren't target towards kids, I've used as a bed time story for Everett in the past. There is a folksy warmth about the tales that made perfect for a young child to curl up in bed and be provided some comfort before drifting to sleep. McLean told stories that could resonate with a lot of people and felt like peeks into the average Canadian family. The stories were brimming with humour but also had a tenderness and a sincerity. They were close inspections and observations on what it was to be a North American (and especially Canadian) family.

A great writer and storyteller is one that has their ear to the ground and their eyes grasping every details. They examine and gobble up every conversation and daily action. They are intertwined with the heartbeats of society and have an intimacy with strangers. A writer looks at the mundane tasks of washing the dishes or taking the dog out for a walk and sees an inspirational, humorous, thought-provoking and valuable story. A storyteller knows everything can be entertaining or has some deeper message to share. This was what made McLean such an enduring storyteller that had captivated many about his tales of a fictional couple since 1994.

His stories were so authentic and astute, that for a while I had believe they were non-fiction. I am sure like every great storyteller, he has incorporate elements and experiences from his own life and those who he knew. A great storyteller is so connected to the world around them that they can turn their stories into something that is living and breathing and real. McLean was a humorist and an entertainer, but he also revealed the truths of everyday life.

My condolences to his friends and family, and my thank you for the many stories and inspiration he provided over the years.
News Stuart McLean Tribute Writing