'Superior Donut' Stuck in the Past 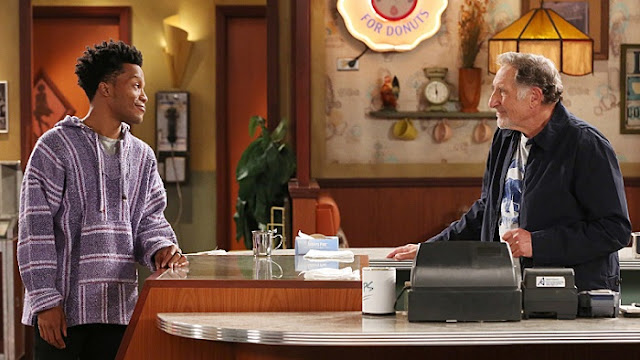 The Superior Donuts (based on play by Tracy Letts) premiere gets points for having a timely issue of a small business owner having to adapt to the gentrification of his Chicago neighborhood and trying to make changes by hiring an entrepreneurial minded black young male. During the Trump era where there are promises of turning back the clock on progress and inciting old hatreds for the "other", there is an important message stuck in this ensemble sitcom about living in modern society and the importance of generational understanding. But the message gets lost in a formulaic and dated story structure with jokes that lack any organic delivery but rather just a rattling of easily set up punchlines.

It is unfortunate because I enjoy sitcoms set in a place that has a regular stream of diverse customers that prattle on about the challenges of their day and interact with a likable store owner. I really think this concept has the potential to appeal to those that may have voted Trump but be able to swallow this sugar coated message about understanding (i.e. the non-fiery racists). Besides that, it has a pretty great cast in Judd Hirsch (Taxi, Dear John, Independence Day: Resurgence), Katey Sagal (Married with Children, Futurama, Sons of Anarchy) and David Koechner (Anchorman: Legend of Ron Burgundy, The Office), but they all feel like cookie cutter characters that have been transplanted from a 1980s sitcom.

I get this on CBS that has its target audience and one with fond memories of Cheers or Taxi. Those series were pretty ground-breaking at the time and had vibrant and eccentric characters. This plays it rather safe and lacks real punch to it jokes, which is unfortunate for a series that really had a lot of potential.
CBS Judd Hirsch Katey Sagal Review Sitcom Superior Donuts TV Series