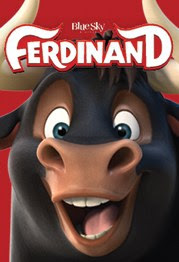 The animated realm has been the best place for promoting diversity in cinema. Last year you had the Japan set fantasy adventure Kubo and the Two Strings and the Polynesian sea-faring musical Moana. We will soon have two animated features based on traditions and folklore surrounding Mexican holiday the Day of the Dead with 2014's The Book of Life and Pixar's upcoming Coco. I think it speaks a lot to the open-mindedness and progressiveness of the younger generation that a lot of these movies were hits and that a "white" lead or "relatable" culture isn't needed to draw in a North American audience. It is something that studios can start learning about movies targeted to older audiences.

At the end of this year, we will actually have yet another Mexican set movie in Ferdinand, which is based on Munro Leaf's 1936 children's book, The Story of Ferdinand, about a bull that isn't interested in bullfights but would rather smell flowers. The first trailer of movie adaptation is really colourful and lively, and it seems to be trying to embrace elements of Mexican culture. Though I sort of wish they went with a Mexican voice actor rather than the very-not-Hispanic John Cena. But at least, this is one of the few times that I can see how the voice actor may appeal to the target audience and they will recognize the person.

This first trailer definitely looks pretty broad appealing and something more catered directly to children. I can also see my son finding out about this and begging to see the movie, so I mind as well stay optimistic about it.