I Know, I am Not Supposed to be Excited About This 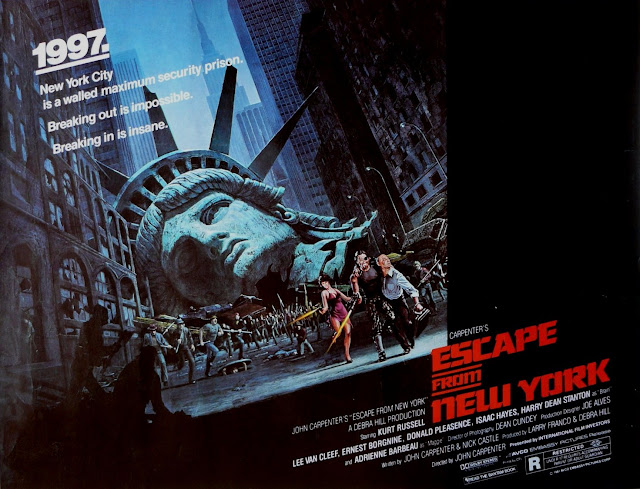 I may have surrender my "I Hate Remakes Club" membership, because even though I still stand by the belief most remakes are pointless or I'd just prefer an "original" movie that borrows liberally from a well-known property, I've been a fan or excited by quite a few lately. Disney has been rocking it with their live-action remakes with Beauty and the Beast being another great one. A while back, I got really excited to hear John Carpenter producing a new Halloween that is going to be helmed by David Gordon Green. Now, there is a potential director hire that has made me interested in a remake that I initially thought could only be an epic disaster, Robert Rodriguez is being target to be the man behind the Escape from New York remake.

He is probably the only director right now that I think has the passions and genre leanings to pull off a proper reimagining of Escape from New York. This is a guy who clearly grew up on a healthy diet of B-movie and schlock cinema. This is the man that gave us Planet Terror (from the Grindhouse collaboration with Quentin Tarantino), Machete, Machete Kills, The Faculty, and From Dusk Till Dawn. Especially the Machete movies are heavily influenced and definite homages to 1970s low-budget schlockfests.

If you look at the filmography of John Carpenter (the man who gave us Escape from New York), he has always been a high pedigreed and ultra-talent peddler of B-movie like stories that due to the top-notch directing and casting have never really been lumped into that category. Escape from New York is a classic because it rolls itself in cheese, never takes itself seriously, yet still delivers a fun action ride. Rodriguez is the director that I trust understands that the best.

If this is going to work then it needs to be a scaled back budget and a hard R-rating, and then the studios need to keep their hands off by trusting Rodriguez to run the whole show. Then the big deal is getting the proper casting, someone that has the charisma and charm of Kurt Russell from the early 1980s. Someone that has no fear of looking like as ass, can ham it to extreme levels, and wink at the camera without making it obvious that is what he is doing. Or she. This actually would be wonderfully awesome if Michelle Rodriguez type was giving the lead. I'm sure the bro-mans would cry and scream, but that is all they ever do no matter what happens anyway. The big kicker is that this needs to be director driven and it needs to channel classic B-movie roots.

That line actually made me think of The Shallows, which was directed by Jaume Collet-Serra. While he would be another solid choice since he is great at pacing and building tension and not afraid to go over-the-top, but I don't think he is ready to delve as far into the ludicrous as Rodriguez has proven capable.

The other question is how close do you stick with the plot of the original? In the modern political climate, are we to believe if the president crashed on a prison island that anyone would hire a mercenary to rescue him? Or would people breathe a sigh of relief and move on with fixing the government. The president as the paragon of truth and virtue isn't really a thing, though in 1981, the public was just moving out of a decade where they had huge distrust of the government and authority as well. But we've never ever had a con artist and slobbering incompetent like Trump before.

Obviously, the president doesn't need to be a Trump type. Though a fun twist would be the president being a conniving egomaniac that is controlling the island and needs to be taken down. Maybe he is doing it to build some more complexes and towers, evilness for the sake of real states going his way.

But the other issue is that New York today is not how people viewed New York in the early 1980s (and throughout the 1970s) It was considered crime-ridden and corrupted, and was the basis for pictures like Death Wish or Taxi Driver. The media helped create it into this terrifying place. A movie where Manhattan was turned into maximum security prison was believable, because it was what people assumed would have to happen eventually. But now New York is one of the top tourist destinations in the world and is considered a metropolitan wonderland. I haven't heard of anyone afraid of the city in years. It doesn't really dig into the current vibe and flow of the culture. Maybe Escape from Chicago would be more fitting based off how often it has been in the news. This by the way, comes from someone who love Chicago and holds the city up as one of my favourite places to visit.

John Carpenter remakes now seem to be the hot new thing with this one, Halloween, and Big Trouble in Little China all being developed at this point. So, now it is time to predict what remake gets announced next: Christine, Starman, They Live or Dark Star?
Escape from New York John Carpenter Movies Musings News Robert Rodriguez