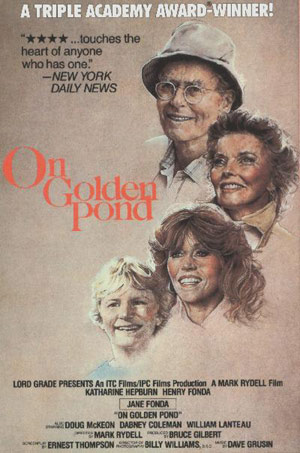 If you want any proof that what attracts people out to the movie theatres has drastically changed over the decades along with more evidence to add to The Breakdown discussion about the death of the box office star, then look at 1981 where On Golden Pond was the second highest grossing movie with a $119, 285, 432 (this is in 1981 dollars). For those that don't remember the smash hit, it is based on a play of the same name (both play and screenplay written by Ernest Thompson) about an elderly couple that goes on their yearly summer trip to their cottage and are confronted by their estranged daughter who needs to them to look after her boyfriend's son. Definitely not the type of story that would cause big studios to salivate today and the best hope for wide release would be Oscar season release from Focus Features or Fox Searchlight that gradually expands.

It was a pretty big deal in 1981 (where it got a limited run in December for Oscar consideration) and 1982 (where it would have hauled in the majority of its gross) due to its massive star power. Katharine Hepburn (plays Ethel Thayer) is movie royalty and is in the lead along with another movie legend Henry Fonda (plays Norman Thayer Jr) who was starring in his final theatrical feature. One of the big deals was Fonda would be sharing the screen with his big movie star daughter, Jane Fonda (who not only starred in the all-time camp classic Barbarella but in 1980 starred in the second highest grossing movie of the year, 9 to 5).

This drew in the masses because the general public cared about movie stars and was intrigued about real life father and daughter starring together. No matter what pairing you had today, a version of this movie wouldn't crack the top 20 and the producers would be doing cartwheels if it got 30 million domestic gross for its entire run.

The game has changed, to the point where there has never been talk of anyone wanting to remake this movie but movies from 1981 that made less are considered more appealing for being revisited such as The Cannonball Run, For Your Eyes Only (James Bond), Superman II, Clash of the Titans, Tarzan the Ape Man, Excalibur, The Great Muppet Caper, Endless Love, An American Werewolf in London, Halloween II, Escape from New York, Friday the 13th Part 2, The Final Conflict: Omen III, The Legend of the Lone Ranger, and My Bloody Valentine.

One of the biggest changes is movies that are completely marketed on stars' name isn't enough for guaranteed box office like was largely the model for decades before. In 1981 movies were also largely considered entertainment for adults and appealing to them was where the big money lied, along with some occasional kiddie fare scattered through the calendar (this of course was changing with Raiders of the Lost Ark being the highest grossing of 1981, Empire Strikes Back on top in 1980 and Star Wars shocking the world by dominating the box office in 1977). Plays were much more well-known and popular in 1981 and so On Golden Pond even without star power would be far more recognizable than plays today (Fences was the 57th highest grossing movie last year).

I also think that the rise of Marvel and DC super hero extravaganzas and a general focus on special effects spectacles has made an entire groups of film goers to just throw up their hands and concede that their type of movies just aren't made anymore. The multiplexes have a reputation for catering to a certain demographic even if there are time where we have a Hidden Figures or La La Land (both that should be noted did above expectations). Plus those thoughtful and adult-driven stories are now plentiful on television and streaming services, which saves a trip and needing to buy over-priced popcorn.

One interesting question is that if studios backed and marketed a movie like On Golden Pond today like they would have in 1981, would it turn out to be a real box office contender? I also concede it is a pointless question because when there is a chance for another Fantastic Four reboot or a sequel to Transformers, they will only put minimal effort towards movies for the mature and thoughtful adult.
1981 Box Office Box Office History Movies On Golden Pond