Even 'Fast' Die Hards are Furious on 'Fate" Finale 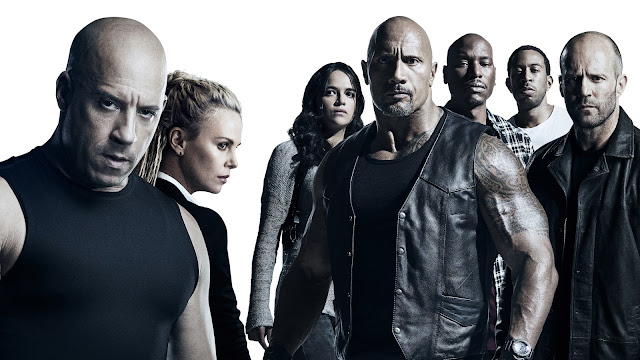 Spoiler warning for those who are actually left that want to see The Fate of the Furious.

The congregation of Fast and Furious is even grumbling over some of the plot issues in The Fate of the Furious. Haliegh Foutch, writer of Collider and clearly a bigger Fast and Furious fan than me, writes a solid piece exploring some of the major plot problems and analyzing how they can be fixed in the two upcoming movies (along with other hypothesizing about the future of the franchise). One of my big issues that got addressed in this article is how Jason Statham's Deckard is paling around with Hobbs (Dwayne Johnson) and Dom (Vin Diesel) with no problems after he had murdered "family member" Han (Sung Kang). The movie was trying to soften up Deckard so he could be Superhero Statham after he was a murderous and heartless supervillain in the previous movie. Foutch believes we may be in store for more redemption of Deckard as it could possibly be revealed that Han isn't dead and potentially pulling a Brian by enjoying Coronas on the beach with the other presumed dead "family member", Gisele Yashar (Gal Gadot). That would help make Deckard more believable on the side of good, though it doesn't really explain why he is accepted now without that revelation.

Han and Yashar returning isn't far-fetched when you consider resurrection seems to be a Furious and Chris Morgan writing staple. Probably even more likely if Wonder Woman is a huge hit, which means the franchise will be more open to using some of Gadot's new star power. The series has already seen Letty (Michelle Rogriguez) miraculously come back from the dead, and I'm glad that a fan like Foutch even recognized it was odd that the once presumed dead then upgraded to vegetable Owen Shaw (Luke Evans) was bouncing around with life now. This habit of going full of soap opera and just bringing people back at the film's convenience is part of the reason this franchise just feels to be lacking any stakes or gravitas. The Han death does really need to be addressed considering the scene of his demise has gone down in three movies now (thanks to Furious' scattered timeline where Han's death initially happened all the way back in Tokyo Drift). If he does return, it is hard to escape yet another eyeball-rolling moment in a series full of contrived plot turns.

Also I like Foutch's observation that Charlize Theron's Cipher is this series' Thanos where it has been revealed she has had a hand in all the villainy that has been going down since at least Fast Five (maybe sooner? My attentiveness in this series is not strong). Cipher was a huge bright spot in the cartoon cavalcade that was the movie, but I think she is better served if she isn't the key villain in the two follow-ups in order to avoid going full on Cobra Commander retreat every time. This could be where the revival of Owen pays off, as it can be revealed he is still in cahoots with her or gets persuaded back to the dark side. This would allow for the family theme to continue with a brother vs. brother storyline and also gives a reason for more Helen Mirren screen time than the one scene cameo. It could also give Deckard some depth as he has to battle with either going against his brother or betraying his brand new "family."

The other final interesting thing about this franchise going forward is where Dwayne Johnson is going to sit. His Hobb's character turned down getting back his badge in exchange for staying at home with his daughter, which felt a bit like a quiet send off for his character. The biggest news surrounding this franchise has been that Diesel and Johnson do not like each other, and Diesel seems to be the one that has some creative power for the series. Though at this point, I'd say Johnson is far more valuable to the movies than Diesel, but it is also clear that Johnson needs it far less than Diesel. If this was the farewell to Hobbs, it gives me even less reason to continue on with this franchise.

I admit over and over that I've just never connected with The Fast and the Furious movies, so my opinion probably matters very little in regarding what they should do. I also recognize it is a pretty big deal in our film culture, which is why I just spent several hundred words analyzing it.
Charlize Theron Dwayne Johnson The Fast and Furious The Fate of the Furious Vin Diesel