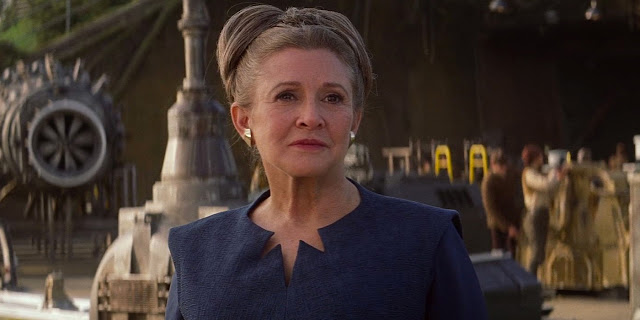 On last weekend's Breakdown, Scott and I discussed the implications of Carrie Fisher appearing in Star Wars Episode IX after her brother Todd Fisher gave his approval for her to appear. The intriguing part was that in order to quell potential fan protest, Lucasfilm had gone on record that they wouldn't CGI General Leia, but we didn't know how that would be possible if she was set to be in Episode IX, which I believe has not started filming. Well, the answer was given today when Lucasfilm head Kathleen Kennedy revealed that while Fisher will have a significant role on the upcoming The Last Jedi, she actually won't be appearing in Episode IX.

While I wasn't really sure where I stood with a CGI General Leia as a significant character in Episode IX, I now am struck with sadness over the realization that this December's picture will be the last time Leia and Carrie Fisher will be on the big screen. Obviously, that was to come very soon anyway and no matter what it would have been the last time the actual Carrie Fisher was on the screen, but it does given an added emotional importance to the upcoming movie.

It adds some intrigue on how they handle her exit. There is a chance that the story for Leia always ended in the upcoming movie, but my sense was that she was to be a major player for the next two movies. This leads me to believe that there would have been things set up for her to continue to do in the proceeding movie. Even if there isn't, it was filmed when they still thought Fisher would be alive for the next movie and so unless the character is written out, it will be kind of odd not having Leia on the screen for the ninth movie. It would be like the awkward The Huntsman: Winter's War situation where Snow White gets name dropped throughout the movie but never seen.

Of course, I don't know where the story is headed or what the fate is for the Resistance, so any concerns may not be valid or an issue. The declaration by Kennedy is an interesting one and goes against a lot of what has been previously assumed (that they need Leia for the story to continue). We will have a better idea come December, and before then it is just farting to make noise. This also makes me realize that a more in-depth tribute piece to Carrie Fisher and what she meant to my childhood and as well, as a writer who struggles with emotional issues is very overdue.
Carrie Fisher General Leia Kathleen Kennedy Lucasfilm Movies News Star Wars