No, This Won't Kill My Childhood But My Future Could be in Trouble 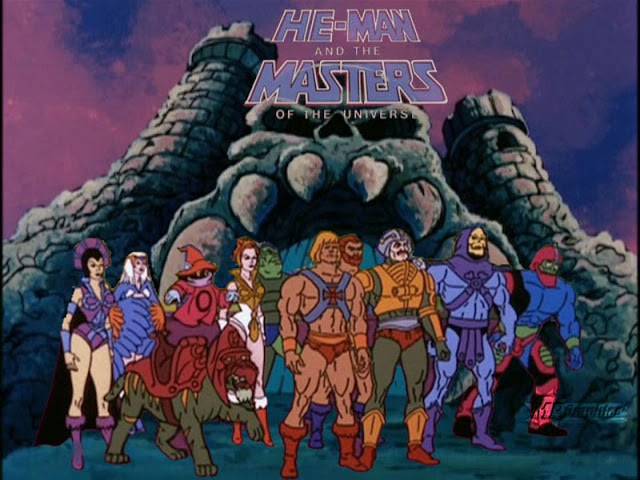 I remember rushing home from school, so that I could catch the 3:30pm airing of He-Man and the Masters of the Universe every day. I probably owned close to a hundred Masters of the Universe action figures and had three different castles sets. I had a shoebox full of View-Master disks with images from various episodes. I bought (or got my mom to buy) the official He-Man and Masters of the Universe magazine. I was also a part of the official He-Man Fan Club where I'd get monthly letters from the beefy hunk in the bear skin underwear.  My point is that I was a rather huge fan of He-Man, with Star Wars being the only thing that usurped it (but Return of the Jedi came out in 1983, so as the years went on there was less new Star Wars stuff to gobble up).

Even the young enthusiastic He-Man fan Christopher thought the 1987 live-action feature, Masters of the Universe was a giant fart in the face. I'm talking about eating five burritos, all-you-can-east Indian buffet, and a tall glass of Sriracha type fart. It was putrid. Now, my reasons for hating it then would likely be different for reasons that I wouldn't like it now. I was bummed that the characters didn't look like they did in the cartoon or toy. I didn't believe the man out to crush Rocky was now someone I should cheer (though as an avid reader of the magazine, I had several months to come to terms with that). I didn't like the fact they spent most of the movie on Earth rather than Eternia where there would have been cool monsters. I think even then I sort of figured the acting wasn't very good, the special effects were cut-rate, and story was rather derivative. The big thing for me as a kid was they just needed more of the characters that I watched on TV or played with in my backyard.

Since 1987, I've stood by the idea that a live-action Master of the Universe movie was a bad idea. It was better for that series to live in the 1980s. Of course, part of that energetic Power-of-Grayskull child lives on in me and keeps whispering that maybe they could do that story right. Maybe they would get a big enough budget and a charismatic enough star and stay the hell out of Earth to make a proper Masters of the Universe. The older and more cynical majority of me just wants to shove a package of Bonkers in that kid's hands and tell him to go play with his Simon electronic game. Masters of the Universe just screams something of its time and a new movie even done right may expose that the memories aren't of something that was really all that amazing anyway.

No matter how I feel, the franchise starved Sony Pictures is going forward with a December 18 2019 release date. I have a sneaking suspiscion it isn't a coincidence the move came the same week it was announced Star Wars: Episode IX has moved to the summer and now, Sony has dreams of being that year's Christmas blockbuster (just like when Battlefield Earth was summer of 2000's Star Wars).. While I don't know if the world will finally get a CGIed Orko or if they will give us an updated version of that killer "He-Man, dooto dooto do do do" theme song, but I do know the movie actually has a fighting chance now.

The screenplay is going to be written (at least initially, because in the modern age there are always fifty billion people to rewrite it) by the man who gave the scripts to movies like Batman Begins, Blade, Dark City, and Man of Steel. Okay, just ignore the Man of Steel. But my point is David S. Goyer can write fun, pulpy, character-driven event movies. He has some pedigree in the big event realm, and so his name means something for Masters of the Universe, Plus my guess is he is a bit of a geek and probably played with He-Man action figure; sure he was almost in his 20s when that toy line came out but I'm confident he knows more about He-Man than the crew that gave us the 1987 disaster.

Now, you may shout out to the heavens that He-Man doesn't have a director. But I argue no director is better than the movie being helmed by the guy behind This Means War, Terminator Salvation and Charlie's Angels. But what do I know, I like The Lone Ranger remake, so everyone's tastes can vary. Now that we live in a world where the live-action Masters of the Universe is McG-less, the great debate is who will direct it. If I had to wager, Sony will grab some male filmmaker who directed one decently reviewed indy and hope he can handle the CGI and follow studio demands well. Or if that fails, there is always Stephen Sommers.
David S Goyer He-Man and the Masters of the Universe McG Movies Musings News Sony Pictures