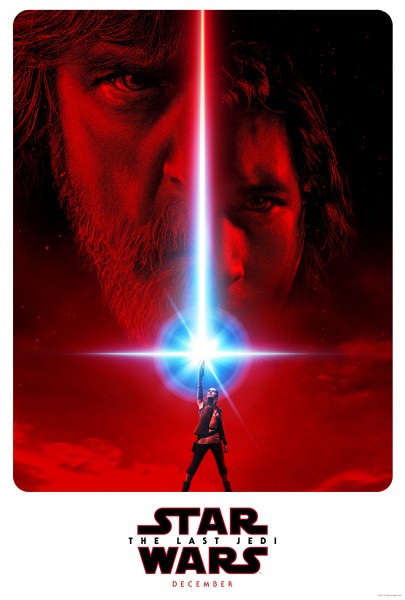 Star Wars: The Force Awakens landed the top spot for my favourite movie of 2015. At the time, I admitted that part of that was fuelled by nostalgia and being overjoyed that the follow-up to a trilogy that was a defining part of my childhood turned out to deliver much closer to my hopes than the prequels. I am aware of the criticism that Force Awakens leans heavy on the nostalgia and in many ways turned out to be less a sequel and more a remake of the original. I can see the argument and the movie is full of call-backs, but I stand by my belief that J.J. Abrams masterfully played with the classic elements of the Star Wars franchise while weaving a new and interesting story. Besides, Rey is way less whiney and more bad-ass then Luke Skywalker was in the start of the series.

Even those that weren't as enthusiastic for The Force Awakens as me at least agreed it was good enough to restore some faith and foster some excitement for the sequels that they hoped would go in some fresh story directions. Besides thinking Episode XI was awesome, another reason for me to really anticipate Star Wars Episode XII: The Last Jedi was that it would be helmed by Rian Johnson. He directed the fantastic sci-fi thriller Looper and has proven to have a very unique and confident way of telling his stories. I am very intrigued to see what his voice will bring to this universe and what he can do with the massive budget that is provided to him. He is one of the most exciting directors today and I think he has the skills to make one of the best Star Wars movies ever. Yes, hyperbole, but the type that I actually believe.

This all leads to the very first peak into what is easily the most anticipated movie of the entire year, and probably the most anticipated since. . .well, The Force Awakens. The Star Wars Celebration has been wowing fans this week in Orlando, and as was expected the first trailer has been revealed. Just like the first teaser for The Force Awakens, it has a lot of pleasing and spectacular scenes without spoiling any of the actual plot. This is exactly what I expect out of a good trailer, which is something that is a crowd pleaser but leaves the storytelling for the actual movie. Of course, we have many months to go with trailers that could show way too much, but the last two Star Wars marketing campaigns have been pretty good at hiding away the juicy bits.

I really dug the opening bit that looks like the classic intro into the galaxy, but then turns into being a rock on the planet that Luke was been hermitting. Luke is playing Yoda now and trying to get Rey to harness the force. At least from the trailer, it seems to answer that he isn't Rey's father, which was a direction I suspected after seeing the last one. He at least seems cool with a perfect stranger showing up with his old light saber and willing to show her a few cool tricks with her powers.

The big question is what does Luke mean by it being time to end the Jedi? Obviously, that was going to be a major story point considering the title of this movie. He doesn't seem like he is totally abandoning the Force since he is willing to train Rey to some extent. He also seems to be bitter and jaded towards the religion he has followed for so long. I am wondering if it means he believes it is time to do away with some of the old Jedi traditions and for a new faction to arise that practice the force. Or is he trying to destroy the whole practice of using the Force? Or is Luke being enticed by the Dark Side again? It seems obvious that Luke will be a complicated figure.

I also assume that it is Luke who is in the robe and hood, because it is R2-D2 beside him. That scene appears to be him confronting Kylo Ren, who would be his previous student and (SPOILER!!!!) murderer of one of his best friends. Considering there is wreckage and flames all about, I am guessing they aren't just going to talk it out over with a coffee and donut.

Finn looks to still be recovering from his injuries from the previous movie. That is all we get from him, but I'd wager he will have a big role in this movie and not just be sleeping during the entire run time. Poe has a pretty cool scene of him racing towards an X-Wing and then it almost exploding in his face. The First Order is definitely on the offensive this time, and looks like the good guys will be taking some major hits. Not sure if it will go full on Empire Strikes Back, but I am predicting this movie doesn't have a super happy ending, but rather a dark cliffhanger with a little hope speckled in.

The Millennium Falcon is back, and I wonder if it is Rey who is piloting it. I had hope for maybe it being Lando Calrissian, but a quick Google seems to poo all over that dream. He remains the biggest of the original trilogy characters to be left out. It would have been fun for him to have one final hurrah.

We got to see the back of General Leia, but it looks like for now, they will try to downplay her in the marketing. Her passing is still pretty fresh, so I'd go with saving that big cathartic moment for the actual movie. It may be hard, since I've heard that she is a central character this time.

The battle sequences look amazing again. We got a few little peaks at some cool worlds and new vehicles. The special effects are pretty awe-inspiring even just watching them on my laptop. This is still with several months left for post-production work, which makes me feel less lenient towards the awful looking Cyborg in the Justice League trailer.

The other really big talk-worthy moments from the trailer is what I assume is the shattered helmet of Darth Vader. Ren had been keeping it as a trophy before and seemed to revere his grandfather, at least his Sith persona. What caused it to be destroyed even more? Did Ren have another juvenile temper tantrum or is there deeper symbolism here? Does this mark a shift in the Ren character? He is definitely one of the more fascinating characters since he isn't just straight forward evil and seems to really be wrestling with his place.

I also just realized we didn't see anything from Domhnall Gleeson's General Hux or Captain Phasma (who is supposed to be far more significant in this movie -- which wouldn't be hard). Gleeson was so great as the frothing at the mouth psychopathic General, and it was so impressive because he usually plays much lighter and even knell types. I look forward to seeing what he does this time and also if Phasma turns out to be as cool as has been hinted.

Consider me thrilled. This easily remains the movie that I am the most pumped to see this year, but everyone already expected to read that.
Movies Review Rian Johnson Star Wars: The Last Jedi Trailers