Time for Bright and Peppy Nightmares for Our Children 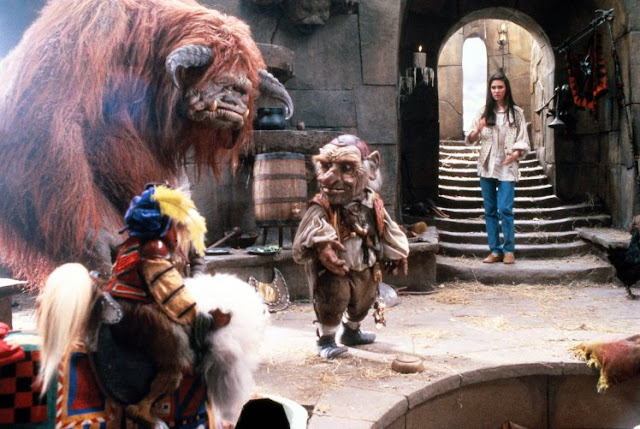 The David Bowie and Jennifer Connelly starring Labyrinth was definitely a children's movie, but also one that I am sure gave many young kids nightmares. There was always a darkness and unsettling nature to the world of the Goblin King and his Labyrinth. I loved it as a kid (still do), but I sure wasn't watching it with the lights off. But saying that, it was directed by the Muppet King, Jim Henson who made his name on making family-friendly entertainment. He was never afraid to be bizarre or go into eccentric worlds (The Dark Crystal is awesome too), but his message was always warm and kind-hearted. At the core it was feel-good family adventures.

So, it wouldn't have been my first choice to have Fede Alvarez as the director and co-writer of the upcoming Labyrinth sequel. Alvarez does have a fantastic visual sense and his shorts show a man with a vivid imagination, but his biggest claim to fame are the horror pictures Evil Dead and Don't Breathe, which are the opposite of kid friendly.

I am wondering if this is supposed to be a movie that appeals to grown up fans of the original Labyrinth that delves into the darker and more disturbing parts of the world. A bold attempt to make a nightmarish version of what was once a children's story (though admittedly a dark one). Or could this be Alvarez trying to challenge himself and stretch out into other genres. His move to prove he can do more than just horror, Sort of like how the man who gave us Jaws also helmed E.T.

Even though Alvarez is firmly established as a horror and thriller director, I always did get the sense he wanted to be like Sam Raimi as a director who proved his skill with a variety of stories. This could be a solid step for him as it still will likely have a dark tone but can also show his softer and gentler side. He showed an ability to add sympathy and warmth in his depiction of Jane Levy's Rocky having a tender relationship with her young sister in Don't Breathe. It also will be his biggest test of how he handles lots of special effects and big set pieces, because that is a must for Labyrinth to work at all. I also wonder if he will try puppets, because his past works show he has a clear affection towards practical effects over CGI.

I rewatched Labyrinth last year, and one thing that was clear was that movies that were considered family movies in the 1980s would not get the exact same distinction today. Labyrinth has lots of heart and a very bouncy energy, but it is also way darker and more disturbing than anything being marketed as family entertainment in 2017. If you look at the 1980s with movies like Gremlins, The Goonies, The Black Cauldron and The Monster Squad, you can see that parents back then were way more down with giving their kids nightmares. For it to work today, Labyrinth actually may have to be a tad softer and gentler, but still capture lots of the energy and imagination.

Now that Alvarez is attached to this project, I look forward to the news that Jane Levy is signed on to star, because we always need more Levy in movies.
Fede Alvarez Labyrinth Movies Musings News