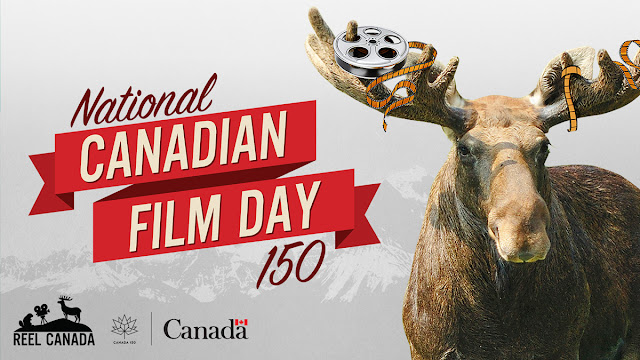 April 19 is National Canada Film Day 150, and in honour of Canada's 150th anniversary, Reel Canada has listed 150 significant Canadian movies. The website admits that the list is obviously not definitive of Canadian produced movies nor should it be considered the best of Canada. But it is an eclectic collection that represents a wide scope of genres, styles, and stories. It should be commended for not just appealing to the indy crowd or the mainstream, and willing to put everything from Anne of Green Gables to Black Christmas to Scanners to Strange Brew to The Goon to The Apprenticeship of Duddy Kravitz to The Corporation to Exotica to The F Word to The Grand Seduction. I would say with great confidence there is something on that list for everyone. The only real complaint that I have with the list is that it leans heavy on representing movies of the past 20 years and only has a scattering of picture from the 1960s, 1970s and 1980s,

Despite that, I think it would be a pretty cool way to celebrate this 150th year of my country by trying to watch and review all 150 movies on this list. Now, I can say right now that my chances of seeing and writing reviews of all 150 pictures in one year is near impossible. But I can probably try to cover most within the next two or so years. The big reasons that I am already conceding in accomplishing this task in one year is that one it is going to be hard to track down all 150 (though I have access to a significant few), next I am already committed to trying to review many new releases every weekend, as well I want to try to review some film franchises this year (Pirates of the Caribbean, Star Wars, Jaws, Rocky), and finally I have other things to do with my time then just watch and write about movies, unfortunately.

I will be taking on the challenge just the same. Looking at the list, I have already seen about fifty percent, and another twenty five percent that I have either possibly seen or have seen in part, and the rest will entirely new. But for almost all, it will be the first time in a long while. I am excited to go on this movie journey and I encourage all of you to watch a few of these movies this year and to celebrate National Canada Film Day 150 on April 19.
Movies National Canada Film Day 150