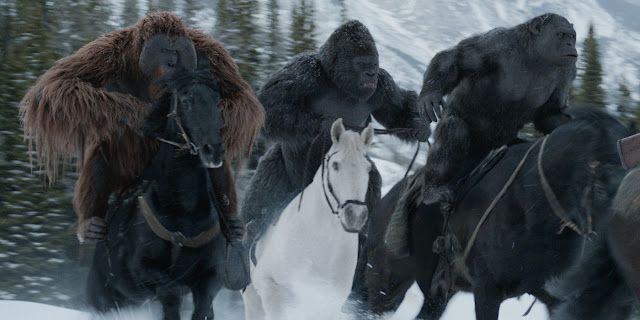 Unless my memory has totally failed me, Caesar and the apes in Dawn of the Planet of the Apes were speaking just a few words at best. They are now communicating in full on English sentences and are completely upright in their walking while becoming talented horse riders. Either their advancement has been speedy or we are once again several years later again. This would make sense, since it looks like the human characters from the past movie have all died off again. Woody Harrelson brings forth the latest xenophobic villain who blames all hardships on the apes and gains leadership with the promise of the apes' extermination.

The apes' ability to talk has likely been made mandatory by the fact that the young speechless girl seems to be the only good human this time. The apes will have to do the heavy lifting of moving forward the plot. Like the previous, they look life-like and the special effects are amazing. There is a chance they are hiding away some good human characters, but I actually expect they're hiding the girls major story arch. If you stitch together this one with past trailers, she seems to have some type of relationship with the gorilla who betrays the other ape. My best guess is he sides with the humans based off something that happens to the young girl. But I could be way off, and it is the young girl that maybe convince the gorilla to sacrifice himself for the apes.

This trailer definitely reveals a lot more but it does its job by giving me more questions than answers. It builds up a lot of anticipation for what at this point is billed as the final chapter of a trilogy. A trilogy that I sense is not going to have a cheery and happy ending even if we're rooting for the apes. I sense some big losses here and Caesar either dead or torn apart after the war is done.

The Apes series has been successful at providing big spectacle while also being thoughtful and philosophical. It is dealing with obvious current social issues and challenging our perceptions of war and the way we are threatened by different cultures. This one looks like it will be just as smart but also provide even more boom for the buck. This one is on the top for most anticipated big summer tentpole.

Movies Review The War for the Planet of the Apes Trailer