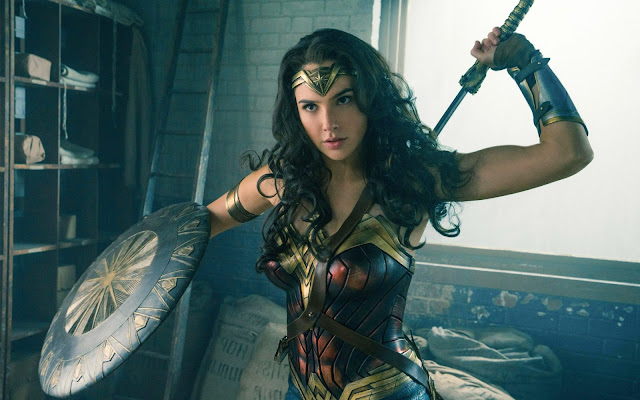 The Warner Brothers' company line has been that the DC Comics Universe movies will be director driven. This is obviously a shot at Marvel Studios that has been criticized for controlling their filmmakers and using them as vessels for their own vision. The problem with WB's stance has been every movie since the DC Universe building agenda has begun has had the same somber tone, scenes soaked in metallic blues and greys, and been slogged down by rushed world-building in attempt to catch up to Marvel. Though the very fair argument is that out of the three movies that have been released, two of them were directed by Zack Snyder but there was no sign of change in David Ayer's Suicide Squad (though admittedly, Ayer's style tends to be of the drab and murky variety as well). Patty Jenkins' Wonder Woman would be the first test to see if DC Studios was really geared towards making a diverse slate of movies and more importantly, if they had an actual good movie lined up, Of all their movies, this is the one with the highest stakes because not only can it be a sign of a rise in quality but also its success will show if more studios will "gamble" on female hero-driven movies in the future.

The colours. Oh the glorious colours! At first, the trailer kicks off with the usual drab greys and steel blues, but that palate allows for Wonder Women's red, blue and gold suit to really cut through. Then there are numerous scenes taking advantage of the entire rainbow and have much brighter pictures.

Some of the action here is a little irritating, such as the constant use of the slo-mo sequences. It also looks like most of it is coming from the same scene or point in the movie. Knowing how trailers are designed to breed familiarity, it also may be a few sequences just made because some marketing folks thought it looked kick ass. On the positive side, Gal Gadot has a kick-ass presence and looks like a bad ass brandishing her sword. There are a few sequences that are actually choreographed rather than CGI work. I also dig little things like her climbing up the wall, because it give an old-school adventure type vibe (any cool classic adventure story needs a good climbing of the wall or tower).

The backstory with Diana and her Amazonian empire looks like it could be really interesting. I like that it was decided by her family that she was too good to help mankind, but she shuns her people to protect the world. It doesn't spell out if that is due to puppy love for Chris Pine's character or from a sense of duty and heroics. It should provide a layer of drama and complexity to the movie and character that has been absent in the explosion fests peddled by Snyder.

Plus there is a sense of humour, and more importantly, it is actually funny, Pine and Gadot play off each really well, and I like the Gadot's fish out of water act. I hope there is a lot of time for them to play off each other and some time devoted to having fun with Diana acclimating herself to society.

I also like a strong, female warrior who is used to being a ruler and being in control who enters into a world that is man-dominated and expects to women to be subservient. It should allow for some political commentary without being didactic or heavy handed. It is the type of movie that is still very much needed in today's culture, and it looks like the deeper material can be crafted in a fun way.

On top of that, there is a villain called Dr. Poison. There is something campy and so on-the-nose about that name that utterly charms me. My hope is rising for this movie.
DC Comics Gal Gadot Movies Patty Jenkins Review Trailer Warner Brothers Wonder Woman