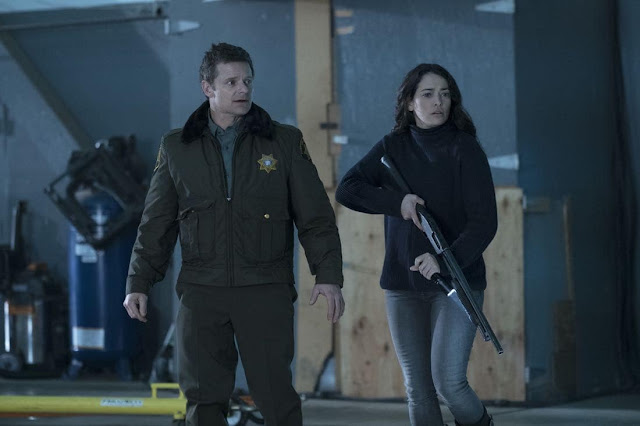 The master plan was to post my quick thoughts on ABC's trailers for their new fall shows last night, but in something that has happened far too often, after a day of writing for clients (with blog posts squeezed in) and playing a dad in real life, my emotions crashed down a canyon and my energy was burnt toast. I have spent more time on here making excuses rather than writing about interesting things, but my ongoing internal battles is part of the reason why this site has become almost exclusively movie and trailer chatter when I keep promising more. I hope to get the site back to its peak of success just like ABC dreams of these shows doing the same for them.

The Gospel of Kevin


Selfish and arrogant jerk gets himself an angel and super powers to learn to care about others and make the world a better place. This looks like exactly the type of show that would be on the network owned by Disney. It actually feels like something that would have been a feature film in the early 1990s (starring John Travolta or Bruce Willis) under the Touchstone label. Considering Kevin has to start doing miraculous things each week, his loser persona will probably be shed pretty quickly and he'll just be a pretty decent guy making people's lives better. This feels like Touched by an Angel, except I don't really know what that show was about but I know my mom dug it while folding laundry.

The premise is a completely unprepared and politically unsavvy man run for political office as a publicity stunt but then wins. How unrealistic is that? No one would buy such a story. At least they kept it to mayor and didn't do something stupid like make him President. It is really great to see Yvette Nicole Brown (Community) back on TV and hopefully, she gets to do more than just be a bewildered mom.

"From the network that gave you Lost" shows you a pretty good idea of what ABC is trying to make the viewer feel about this series. It has an intriguing premise with a small town sheriff discovering several people washed up on shore who claim they turned up there to escape a war in the future. The trailer definitely is full of twists and turns, which at least promises for a crazy paced and jam-packed premiere. It also hints that maybe these people aren't totally innocent and as well, that there was someone else that has already come from the future. The thing that you really have to ask yourself before committing to this series is if the showrunners already have some answers waiting or will this really be like Lost where they keep on throwing crazy stuff on the screen without ever offering an explanation. I was at first nervous about Steve Zahn going serious but he looks to handle the drama well in this trailer. It will be interesting to see if there is an attempts at allegory to modern politics with the immigrants from another time fleeing a war and needing refuge from people who did not want them (or at least, know about them until it was too late).

It is a new fall season so there has to be a new Shonda Rhimes drama on ABC. It offers everything I'd expect with witty banter, trendy music, slick stylish edits, soapy romance, and feel-good speeches. Shondaland is a TV empire for a reason, because she appeals to a rather significant demographic. I will happily remain outside of it.

It's a magician who uses the power of illusion to fight crime. That must have been a failed late 1970s DC comic first. It is essentially Elementary or Scorpion or The Mentalist but with card tricks. Watch as my interest completely vanishes, but I can see this be a hit in order to spite me.

Detective and medical shows with a twist or idiot savant lead seem to be a premise that is destined to spawn two or three or eight new series every single year on the networks. I like the idea that they are making a lead character who has high functioning autism and it is one of the signs of television trying to be more progressive. The trailer seems to be more into making it a super power rather than something many people have to live with every day. I hope the series is willing to really tackle autism and make the lead into an authentic character. If you remove the autism part, this looks like a billion other shows that have come out over the last decade. This could be special if there is any attempt to really run with the concept.

Ten Days in the Valley

A TV screenwriter must us the power of her TV scripts to solve the kidnapping of her daughter. Or at least, that is what I got out of this trailer. And that Kyra Sedgwick gets to be the lead, which is the best thing about this series. It is also nice to be Adebisis from Oz has turned his life around and is now a detective. My guess is there will be lots of soapy and twisty turns, but each week a new suspect will be shown to be innocent until ABC gets tired of that formula, then the girl is rescued. Then the series turns into a straight prime time soap or she solves more crimes with the power of her word processor.

Um ABC, telling us Zach Braff is the producer, director and star of the new series isn't the selling point that you think it is in 2017. I'm also not sure how we are supposed to cheer on a guy who abandoned what I assumed was a steady job for the very unsteady podcast company that from what I can tell doesn't do podcasts but rather catapults dolls into walls. Dropping your job for your dream is something that works real well when your 20 but makes you look like a bit of an ass when you're a father. I find that is always the problem with Braff, he makes unlikable characters without really knowing it. But despite things, I was excited to see Tiya Sircar who had a supporting role as Real Eleanor in the fantastic The Good Place (if I was with it, I would have reviewed the whole first season). But then I realize, her being a regular on this show may mean that I shouldn't expect her to return. To end this on a positive note, I really love that TV series (and movies) are allowing for way more mixed couples because it better reflects at least the world that I know real well.

Just the other day, a little thought bug crawled into my ear and made me wonder, "What is Jenna Fischer doing now? I haven't seen her in anything for a little while, but she is so great." Well, she has been doing this, apparently. As a 90 minute romantic comedy feature, I think it could be a funny, sometimes insightful, feel-good piece of entertainment. I don't see how you drag this out into something that can have multiple seasons, let alone the 22 episodes expected (though nowadays, some networks smartly just order 13). This will likely end up being one of those series that will need to abandon their premise by the first season and then have a title that doesn't really make any sense anymore. I may still give this shot, because Fischer is awesome.