'The Guardians of the Galaxy Vol. 2' Review: A Well-Crafted Cover Version of the Hit Original 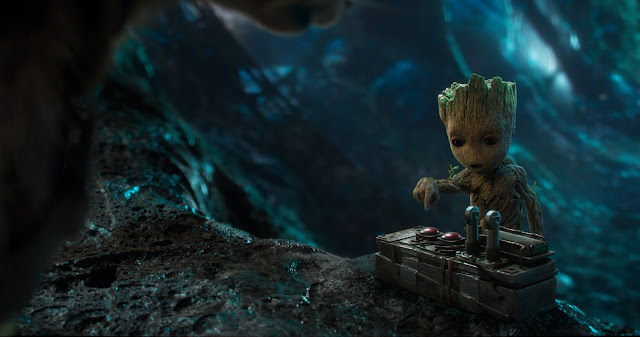 Guardian of the Galaxy Vol. 2 follows a common sequels trend by offering more. It has more explosive action sequences. It has more one-liners, jokes and visual gags. It has more characters joining the team. It has more CGI intensive sequences with vibrant colours and big fireworks. It has more scenes exploring how this team is really about broken people finding a new family to recover what has been lost. It has a villain who is more destructive and powerful than before. But in giving the audience more, it has become less than the original.

The return of our favourite team of a-holes is still an enjoyable time, and it will be one of the big summer features with the most personality. The biggest challenge facing director James Gunn is that in the original he crafted such an irreverent and unique space opera that fused the b-movie sensibilities of Flash Gordon with the gloss of big budget spectacle. It was a massive injection of freshness to the Marvel Universe that gave the studio something original and strange. Gunn and his team delivers a fun sequel that ends up following the same beats but louder and flashier.

It even kicks off with a familiar prologue set in 1980s Earth, but this time it establishes Kurt Russell's Ego as the father of Peter Quill (Chris Pratt) and drops hints for some big revelations to come later in the movie. Following the original's formula does not equal mundane, as it also means Gunn continues to go against standard tentpole procedure in the following scene where the camera follows Baby Groot (CGIed but Vin Diesel gets the voice credit) dancing around to Quill's classic rock tunes and kicking miniature dinosaur-like pests rather than focus on the spectacle of the Guardians battling a giant tentacled slug monstrosity. While most tent poles sent out to dazzle and bludgeon with grand special-effect orchestrated action, Guardians makes it prime focus to charm us with the adorable and cuddly tiny tree alien.  It establishes the tone of a filmmaker not taking himself too seriously and declaring laughs are as important as thrills.

Eventually, we get to witness the big take down of the monster but the quirky personalities still remain a focus with Quill doing his typical bickering with Gamora (Zoe Saldana) and Rocket (voiced by Bradley Cooper) while Drax does his brave to the point of stupidity act. The movie's greatest strength is that it allows its character's vibrant and eccentric personalities to rise above all the CGI flourishes. The Guardians' victory over the monster allows them to collect their reward from a race of pretentious golden beings, known as the Sovereign, who are easily offended and humourless (which of course means their interaction with our heroes is delightful and funny). The payment turns out to be a captured Nebula (Karen Gillan), who was one of the villains from the original and also sister of Gamora, and to the movie's benefit, this time gets a much more expanded role.

Rocket ensures we get to see much more of the Sovereign as he steals some of the batteries they had been hired to protect. Along with the Sovereign hunting them, their leader Ayeshi (Elizabeth Debicki) hires Yondu (Michael Rooker) and his Ravagers to capture the Guardians, which they happily agree to do as they're a little steamed over being tricked out of an Infinity Stone in the last movie. The original movie hints to the complicated relationship between Yondu and Quill, it digs deep this time showing Yondu is torn with his feelings for Quill who he has raised up after capturing him several decades ago. The themes of parenthood is a huge one as Quill's father is finally revealed when Ego saves the Guardians from a Sovereign attack and invites Quill back to his planet that he created.

This is where the plot really gets trucking along and also exploration into the major themes like how do we define a true family and wrestling with past mistakes. Quill has the opportunity to finally have the father figure he sought out, but also confront him over why he abandoned him and left his mother to die from cancer. Quill is also lured into bonding with his father over the promise of having great god-like powers, including the ability to create an entire planet. Quill's joy over finally meeting his real dad means ignoring his adopted family members like Gamora who senses something is off about Ego.

The themes were explored in a far more subtle fashion in the original and were much more effective even though less dramatic. In the first movie much of the humour came from Quill basing everything off '80s pop culture, risking his life for the Walkman, and being really attached to his nickname of Star Lord. Then it all came together in the end when it was revealed all this attachment existed so he could stay connected to his dead mother and be linked to the only family that he had. It added more power to the big climax where he links arms with his new family, the Guardians of the Galaxy to defeat Ronan.

This time around, there are several major dramatic scenes that are at times are written in a heavy handed fashion. Yondu openly wrestles with his guilt over his life choices and questions if he was a proper father-figure for Quill. It leads to a powerful performance by Rooker when he confronts Rocket for acting in a way to hide his own guilt. Nebula confronts Gamora over the failing in their relationship and how all she ever wanted was a sister. Some of these moments come off forced and it tries hard to give a big cathartic moment to every character when less would have had greater impact. Most of it still works because the performances are passionate and the groundwork was made to make us care about the characters.

The movie never delves too far into drama and Gunn proclivity towards the offbeat and sight gags keep the energy bouncy and uplifting. Baby Groot delivers several fun gags with his propensity towards misunderstanding the simplest of instructions. Drax is even funnier this time around with his bluntness leading him unintentionally rattling off insults to new character Mantis (Pom Klementieff) when he is attempting to be comforting, Some the funniest stuff comes when a gag or one liner is tossed in when things are supposed to be there most dire or dangerous, which is refreshing compared to those big flicks that take themselves super serious.

The big final battle is still Marvel type flurry of CGI and chaos. While the special effects can overwhelm, it still maintains some heart due to the focus on personality. We get a fun gag where Rocket tries to explain how a bomb works to Groot and then gets Quill to go on an errand to find tape amidst the danger. Gunn also finds time amongst the big battle to throw in some more 1980s pop culture references with one specifically being a huge crowd pleaser in my screening. The finale also has stakes and consequences that deeply affect the characters that is something often absent from other Marvel movies. It leads to a moment that earns its attempt at being heart wrenching and emotionally moving.

The second time around loses some of the freshness and the charm has to fight against the mandate of a sequel being louder and flashier. This movie shows James Gunn has grown and become a more confident filmmaker.  This is one of the few franchises that has a sense of being director driven and containing the voice of the filmmaker. Also after two movies, Guardians feels very self-contained with its story being directly about the characters rather than about building up the grander Marvel Universe, There are some reference to Thanos that builds to next summer's Avengers: Infinity War, but there isn't any blatant attempts to connect this to the other Marvel franchises. Even the five stingers in this picture are either just gags or build towards a Guardian specific sequel, and that focus is refreshing and something more movies should follow.
Chris Pratt Guardian of the Galaxy Vol 2 James Gunn Marvel Studios Movies Review