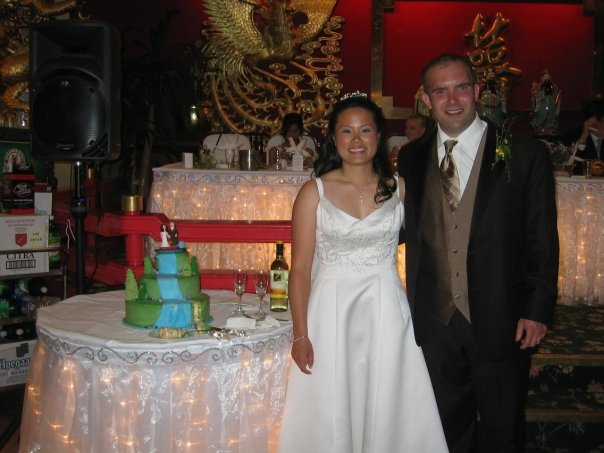 Emily does not say "I love you" very often to me. It could be weeks or maybe even more than a month before I hear those three words directed towards me, though she says it daily to our kids. I say the words several times a day. When I say them to Everett or Danika, I get an enthusiastic "I love you" in return. After I say it to Emily, she usually asks why I put a small ceramic bowl where the plastic cups were supposed to be put in the dishwasher.

I have read several articles about many decades married couples who say "I love you" several times a day and make sure to state it even when they are angry or tired. The articles tend to allude that saying those words are a major part in keeping things in perspective and a small (but integral) way for the partner to remind the other their value and importance. I tried showing the pieces to Emily a few times but then she tries to pluck my nose hair so I run away.

There are a few of you reading this that are surprised. You probably can't imagine a spouse that doesn't return a "I love you" when it has been delivered. But that is probably because you have it ingrained in your head how a marriage is supposed to work because of the several books and shows and talks about it. I am going to let you in on a little secret, there isn't one magical way for a marriage to work and make it to nine years.

It makes me think about another thing I've been doing now for five years, parenting. Before Everett, I read some parenting advice books and I got all the tips that I could get from several other parents. Then it quickly became clear that Everett did not fit the mold of all those other kids. Then Danika came along, and she was the exact opposite of Everett. Now, when I see new parents start panicking about the rules of parenting or if they are messing up their kids, I ask if their kids are healthy, happy, and safe. If they are, then they are doing it right. They probably are not doing it the way that Emily and I do it, but surprise, surprise, that is because that are not Christopher and Emily nor are their kids Everett and Danika.

Emily isn't the stereotypical wife. The reality, nobody is the stereotypical wife. She excels at going against expectations. Emily likes power tools and knows how to use them. She also can bake and is an amazing cook. She has played Australian rules football for five years, which means on a weekly basis she is sporting bruises and dislocated fingers. She doesn't really enjoy romantic movies and is more likely to watch a Liam Neeson action flick. If she has an injury or a pain, she isn't going to tell you but would rather just try to glue back on her amputated limb. She takes great pride in being perceived as tough, but if she sees a man cry, she will bawl. Despite all that I just described, she is incredibly sensitive, kind, and compassionate. She just may not show it in traditional ways.

That is why I adore, admire, and love my wife. She is her own strong, independent, and beautiful woman. She is unique and doesn't fit into some ridiculous box. She surprises me and pushes me on a daily basis.

She may not say the words "I loves you" often, but she shows them every single day. She keeps our family in order, is the first to create remedies for the sick, and stays on top of everything to keep life smooth. She is an introverted person not always comfortable sharing her feelings, but opens up to me about her dreams and fears. She is passionate and passes it on to me. She arranges weekend events because time spent is her treasure, and loves adventures with her family. She pushes me to be a better person and doesn't accept silly excuses. She believes in me and my writing, and that means more to me than words that are so easy to say. She is my inspiration, mother of my children, and the love of my life. She is one of a kind, and I am so happy she has been my wife for these last nine years. I am excited about the next nine and the nine after that and the proceeding nine and so on.

I love you Emily and happy anniversary.
Musings My Life