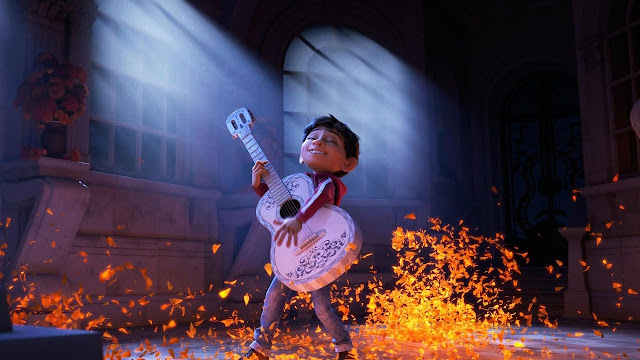 People love trailers. I love expressing my opinion. So, here is fun for everyone.

I can't think of a short getting such a big and early marketing push since Mickey's Christmas Carol that came out in 1983 packaged with the re-release of The Rescuers. I remember as a kid being more aware of the Mickey short than the mice on a mission to save a girl, as most of the heavy marketing was around the Christmas short. Based off the trailer, this looks like it is going to be a pretty long short maybe somewhere between 10 to 20 minutes if I had to guess. The trailer shows a lot of scenes, a big cast of characters, and is a big change from the type of short that a modern audience is used to seeing. It is also a short to one of the biggest animated movies of the last decade and one still firmly in the zeitgeist, so I can understand why they are promoting this as an event movie. This will likely help Coco be a bigger hit in the box office, since I can see some kids just wanting to go so they can revisit Olaf, Elsa, and Anna.

Most horror has a gritty and worn feel to set the atmosphere, and watching this trailer, there is good reason they lean that way. This first half feels like a teen party picture and the glossy sheen wipes out any of the possible tension. They are dealing with a rather spooky concept of life after death and daring to play God, except none of that heavy material seems the least bit creepy. Then when they do get into the scenes with things from the other side that are coming out to play, it is a pastiche of horror tropes and cliché like when Ellen Page is dragged into the darkness. This looking like another misguided horror remake despite what is a solid cast and an idea worth revisiting.

It is fitting the first Black Panther trailer came out shortly after the release of the ground-breaking Wonder Woman. This movie is another to shatter down misconceptions of what is necessary for a blockbuster, with a Black superhero in a massive big budget event. On top of the black lead, we also have a movie that hints at having some African culture drive some of the narrative, as well has a significant Black cast. Much like Wonder Woman, it stands out by having bright, beautiful colours and an intriguing fantastical world that is unique and eye-popping. The trailer promises some pretty cool action sequences, but also looks to have a lot of interesting stories and characters to serve up. Ryan Coogler is one of the most exciting directors around right now, and I really look forward to seeing his voice shine through. Plus it is an amazing cast with great performers like Chadwick Boseman, Michael B. Jordan, Lupita Nyong'o, Daniel Kaluuya, Angela Bassett, Martin Freeman, Forrest Whitaker, and Andy Serkis. This is easily going to be near of the top of my most anticipated 2018 movies.

Every trailer for Cars 3 has made me think this is a collage of every sports movie cliché ever performed by animated cars. At least, the target audience hasn't seen Rocky, Breaking Away, and Chariots of Fire.

Kidnap looks like it could be this summer's The Shallows, except instead of a women battling a shark it is nefarious kidnappers. Both movies plucked a popular B-movie subgenre from the past and gave it some modern fixings while never taking itself too seriously. "You took the wrong kid" may be the best line of the year, and right there, epitomizes what this movie is trying to be. This looks silly and schlocky and ridiculous, and I trust that is exactly what they want to be while being smart enough to play it all serious.

After Relativity went bankrupt, Aviron picked this up as their debut feature as they are the latest distributor looking to release star and story driven mid-budget pictures that are aimed to appeal to an audience that feels alienated by modern multiplex offerings. They are joining distributors like Annapurna, STX Entertainment, Broad Green Pictures, and Bleecker Street who are releasing the type of pictures that the franchise-obsessed studios are ignoring.

The title makes you think it should star Steven Segal. But Bruce Willis and Hayden Christenson are pretty solid replacements. I just wish the Deputy was played by Jake Lloyd.

Nova looks to be the emotional current and the dramatic drive of the movie. The few scenes seem that both sides are going to want her, and my prediction, is she will play a major roles in the climax. She may be the cog for a tragic finale or I also suspect a link to the original movie (if this series is trying to be a relatively faithful prequel to the 1968 original, Planet of the Apes).

The latest Coco trailer reveals the major plot of a young boy who finds himself the first living human to be transported to the Land of the Dead, where he meets his ancestors and needs their help to get back home. I'm a big fan of Disney and Pixar's recent decision to make fantasy adventures around other cultures and their mythology. Moana was a gorgeous, sweeping adventures that also seems very respectful of Polynesian culture while using its traditions and music to amplify the story and aesthetic. Now, Coco is another visually stunning looking fantasy adventure that is using Mexico's Days of the Dead as a basis and allow elements of the culture to enhance the visuals and styles of the movie. Last few years Disney and Pixar have given destined classics in Inside Out, Moana, and Zootopia, and Coco looks to have a lot of potential to follow that path.

For some reason, Vertical Entertainment decided to release a trailer for Blind that must have been shot in 1995, but to cover their mistake, they used CGI to age the leads. Because obviously, no one would make such a dated feeling movie with actors playing roles that no one wants to see them in anymore.
Black Panther Blind Cars 3 Coco First Kill Flatliners Kidnap Movies Olaf's Frozen Adventure Review The War for the Planet of the Apes Trailers